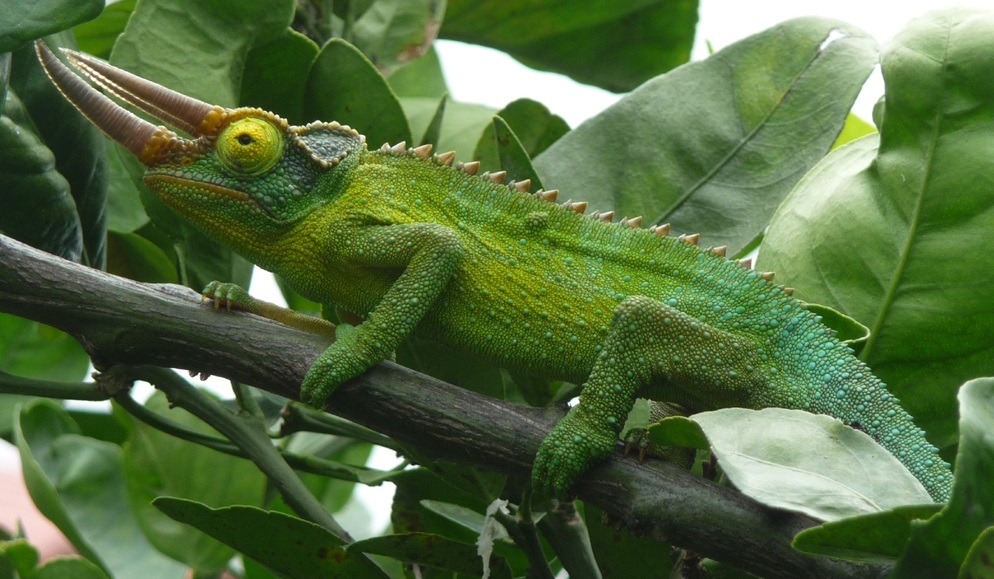 Also known as Trioceros jacksonii, the Jackson’s chameleon or the Jackson’s three-horned chameleon is noted to be the Species of the Chamaeleonidae family that thrives in the region of East Africa including Uganda where it is encountered on Uganda safari tours. However, it has been introduced to states of Florida and Hawaii.
Belonging to the Animalia Kingdom, the Chordata Phylum, the Vertebrata Subphylum, the Reptilia Class, Squamata Order, Lacertilia Suborder, Iguania Infraorder, Chamaeleonidae Family, Chamaeleoninae Subfamily, Trioceros Genus and T. jacksonii Species, the Jackson’s Chameleon is an impressive animal that was first described in 1896 by George Albert Boulenger who was a Belgian – British zoologist. It derives its scientific name Trioceros which means three from the range of three (3) horns that are located on the male heads. Its specific name jacksonii belongs to the Fredrick John Jackson the first governor of Kenya and also a re-known explorer and an ornithologist. The Jackson’s Chameleon features three (3) sub species including the T. j. jacksonii, T. j. xantholophus and T. j. merumontanus
Regarding the description, the three (3) horned chameleons are called so as a result of three brown horns that are possessed by males. The one horn is on the nose called the rostral horn, the other are above every superior orbital ridge after the eyes and are called preocular horns. The females of the Jackson’s Crocodiles do not feature horns. The coloring of the Jackson’s Chameleon is always bright green where some individual members feature traces of blue and yellow but it can be noted that like other chameleons, they also alter colors quickly according to the mood, temperature and health.
The Jackson’s Chameleon are small to medium sized and the mature male can stretch up to 38cm while females can stretch up to 25cm but the typical length is usually 15 – 25cm. These Species feature a saw-tooth shaped dorsal ridge and do not have gular crest. Sexual maturity among these Species is attained at 5 months of age and their life span varies but the males tend to thrive longer than the females.
Regarding the diet, the Jackson’s Chameleon thrive majorly on small insects though they also feed on centipedes, millipedes, isopods, spiders, small birds, lizards along with snails that exist in their habitat as at times explored on Uganda safaris.
It can also be noted the Jackson’s Chameleon is not all that territorial like other Chameleon Species. The males tend to be dominant over one another by displaying colors and posturing so as to maintain rights but no the extent of the physical fights.
Regarding Reproduction, though most Chameleons are noted to be oviparous, the Jackson’s Chameleon gives birth to a live offspring. They normally give birth to 8 – 30 off springs following a gestation period of 5 – 6 months. The T. j. merumontanus Sub Species can give birth to 5 – 10 live off springs