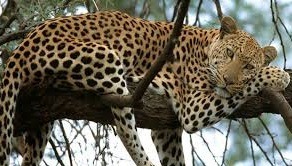 Leopards are considered to be among the big five of land animals that are always encountered by travellers on safaris in Uganda. They greatly thrive in the protected areas of Uganda including National Parks and like elusive life that their encounter is rare at times.
It is so unfortunate to hear these Uganda safari products have now resorted to terrorizing the communities. The residents of the Sub county of Buwunga in the district of Masaka are apparently in terrifying moments as a result of leopard invasion. The Leopard is noted to have attacked the villages of Bujja, Kibindi, Kayijja and Bukyulo eating a range of livestock including goats, pigs and counts of poultry.
The residents amidst fears assert that it is really new to them to have an encounter with a leopard during the broad day light. These animals used to wander late at night during the past but it is such a wonder that they can now appear during day. This has created moments of fear and the residents fear to send their kids to school early morning or to the wells to fetch water. Though leopards continue to have a position on the list of travellers planning safaris to Uganda, if they continue to terrorize the communities then their fate is not certain as the community would definitely turn against them.
The Area councilor Julius Ssekiwunga called upon Uganda Wildlife Authority to come to the community rescue but he continued to note that this could be as a result of wildlife habitat encroachment. The people have encroached on all forests and cleared them for farming and yet these were the habits of such animals. This in turn pushes them to invade communities because they have nowhere to hide.
The need to stop swamp reclamation and deforestation is urgent so as to maintain the habitat of such wildlife species that would not only create human wildlife harmony but also ensure continuity of Uganda safaris and tours.
Uganda safaris/Uganda safari News
Prime Uganda safaris & Tours Ltd