The role of Jomo Kenyatta International Airport to the development of Tourism in Uganda.-Prime Uganda safaris & Tours safari updates 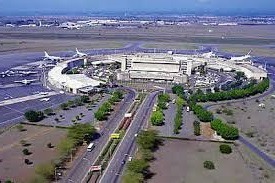 Jomo Kenyatta International Airport is an important source of travel for Uganda since it has greatly contributed to the movement of tourists from one east African country to another, hence encouraging the increase in the number of Uganda safaris in the country.This Airport is a big hub for Entebbe international Airport since many tourists who come for safaris to Uganda have passed through Jomo Kenyatta international Airport to arrive in Uganda. This has an easy way of moving tourists from one country to another,The burning of Jomo Kenyatta International Airport affected both international and domestic passengers since there was delays in the flights of passengers who were supposed to travel from one place to another. This affected the visitors who were supposed to come for Uganda safaris in the way that they were delayed to enjoy their visits.The Airport has also worked as the hub for connecting flights between Uganda and the other countries of the world where tourists travel from to come for safaris to Uganda. This has helped in transferring visitors from one place to another especially in the East African countries.However, after the destruction of the Airport, the flights were stopped from operating in Nairobi and especially the international flights; this affected the safari visits to Uganda hence affecting the tourism industry in the country. Even though, there was this destruction, the international flights resumed as early as possible and this put everything in order after the outbreak of the fire.The fire at the airport however led to the destruction of huge sections of the international arrival terminals, the shops, the area connecting to the units, banks, forex bureaus, travel agencies and the airlines.