The tourism revenue increases to shs6b 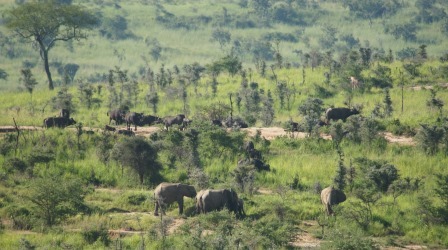 The tourism sector of Uganda is credited for having increased the contribution that it extends to the country’s Gross Domestic Product (GDP). The revenue that was generated from the travelers on safaris in Uganda in the financial year 2014 / 15 rose to Shs6.3b from the Shs5.6b that was generated in the past year.
The Tourism sector performance review that is conducted annually was released of recent in Kampala providing the above mentioned figures. The industry officials and players in the private sector are in the joyous moods evidencing that their endless efforts to market Uganda and increase the numbers of travelers planning safaris to Uganda have not hit a dead end.
The tourism sector growth transformed to 9.9% which is about 96.7 trillion of the Gross Domestic Product rising from 2013/14 figure of 7.9 %. The new percentage can be attributed to the increment on the number of Uganda safari undertakers that stood at 1,266, 046 people in the year 2014 rising from 1,206,334 for the last year.
The rise in the tourist arrivals in Uganda is point of joy to every tourism industry player and the officials from the Ministry of Tourism attribute the rise to the improved marketing of Uganda along with improvement in infrastructure among other aspects that have made the quality of travel better and in turn invigorated the world travelers to take Uganda safaris.
In the year 2013, the tourism sector contributed 5.6 trillion about 7.9% of the Gross Domestic Product while in the year 2014; the tourism sector generated 6.4 trillion about 9.9% of the country’s Gross Domestic Product. Amazingly, in addition to the 9.9%, the tourism sector generated 592,500 jobs rising from the 2013 figure of 551,100.
The Minister for Tourism Hon Maria Mutagamba in communication about the report acknowledged the potential of Uganda’s fauna and flora in transforming the national economy provided the government intensely supports the tourism development. She called upon the local governments to incorporate the tourism agenda in their budgets and that the ministry is crafting a plan for tourist site development along the Nile River and the sub region of Rwenzori where the remarkable scenery still hold the potential to pull the travelers to take Uganda tours.
The Chief Executive Director of Uganda Tourism Board Mr. Stephen Asiimwe notes that the board intends to innovate and invent more Uganda tour products that cam compel the visitors to spend more while on holiday. He cited the desire to revive the national carrier which would play a significant role in marketing Uganda world over.
The Uganda’s tourism sector is anticipated to rise by 8.0% in the year 2015 and by 6.6% each year from the year 2015 to the year 2025.