Buganda tourism exhibition is an annual event held by the Buganda kingdom. It emphasizes the importance of culture promotion and environmental conservation in Buganda. It also continues to portray the beauty of Buganda kingdom to our visitors who always come for Uganda safaris/Uganda safari/ safaris in Uganda.

The expo that took place in 2017 was held at the Lubiri palace in Mengo. Many organizations like the Kampala City Authority, UTB (Uganda Tourism Board), Uganda Wildlife Authority among others played a big role in supporting of the Buganda Expo.

Buganda tourism expo and the kingdom at large depicts the culture and norms of the kingdom through tourism. Where tourists have Uganda safari tours to learn more about the fascinating culture and how it operates.

The Kabaka with company of his wife the Nabagereka had an exciting tour around the different stalls that were set up at the Expo. The stalls possessed Ganda foods, Ganda architecture, wildlife and many other interesting expo platforms. 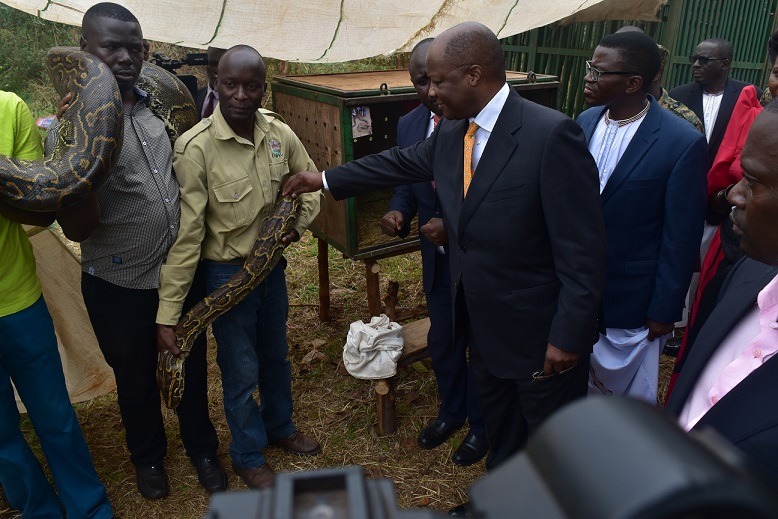 A picture if the Kabaka touching the Big UWA python

During the Kabaka’s speech at the expo, he urged youths to have an upper hand in preserving, promoting and enriching their culture. Culture can be a source of tourism which greatly contributes to the economy of the country.

The kingdom has quite a number of things that you would want to know.

The Buganda’s Kings palaces were always enclosed with reed materials. There was a cultural game known as Omweso (mathematical game) which was played by both the old and young men in the olden days.

At the closing remarks during the Expo finale, the Buganda deputy tourism minister Rita Namyalo unleashed a book entitled Buganda, Gate way for the Pearl of Africa. this enthralling book was launched by the Kabaka of Buganda.

All in all, it is important to promote our cultures because in doing so, we in-directly promoting the tourism sector.