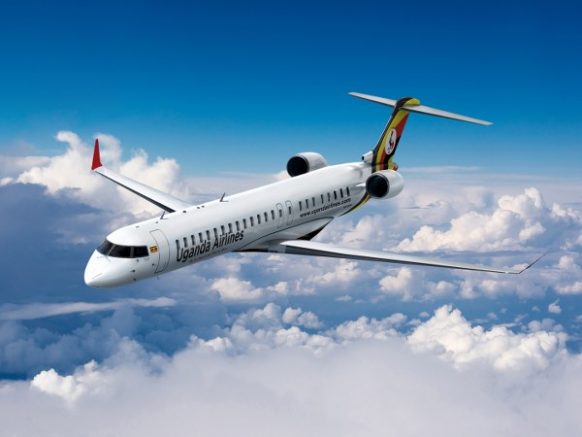 After a successful test flight of Uganda’s first Bombardier CRJ-900, the crane will soon fly to the pearl of Africa. Uganda Airlines is projected to commence operations this year 2019, with flights destinations round Africa, and beyond. On the 16th of February 2019 one of the 4 Bombardier CRJ900 aircrafts had a successful flight test at Montreal Mirabel International Airport, Canada sighted in a video filmed by Mark Brandon. Uganda Airlines is expected to operate the CRJ900 in dual-class configuration with 76 seats, including 12 first class seats.

In July 2018, Uganda Airlines-the national carrier of Uganda, signed a memorandum of understanding for a total of 6 aircrafts. These included two (2) A330-800neos by Airbus and four (4) new CRJ900 regional jets by Canada’s Bombardier. Though with daily international flight at the countries Entebbe International Airport just at the shores of Lake Victoria, Uganda has been without a flag carrier since 2001.

Seeing the first CRJ in the country’s signature black-yellow-red tail with Uganda’s prestigious bird, the Grey Crowned Crane taking its maiden test flight is something that aroused happiness among Ugandans. The CRJ Bombardier bears the words “Fly the crane to the Pearl of Africa”, a statement that one can say is from the name of the country’s national bird-Grey Crowned Crane and the popular statement made by Sir Churchill Winston, former British Premiere, when he referred to Uganda as the “Pearl of Africa”.

To many Ugandans, the Airlines comes as a response to a prayer to boost tourism in East Africa and beyond. Regional jets will surely boost Uganda safari tours, Tanzania safaris, safaris to Kenya and Rwanda tours within the East African region with ease in travel. The revamped Airline is surely going to compete for airspace with tested continental airlines like Ethiopian Airlines, Kenya Airways, South African Airways, RwandAir, and many others that have for decades made daily flights to Uganda.