Background of Kidnap incident in Uganda

Uganda was put on the spotlight when an isolated event occurred on the evening of Tuesday 2nd April 2019 where 1 American citizen; Kimberly Sue Endicott and her Uganda tours driver guide Jean Paul Mirenge were kidnapped during an evening game drive along the Edward track in the Ishasha sector of Queen Elizabeth National Park. Uganda is safe and we continue to emphasize that this was an isolated incident.

Interventions that followed the incident 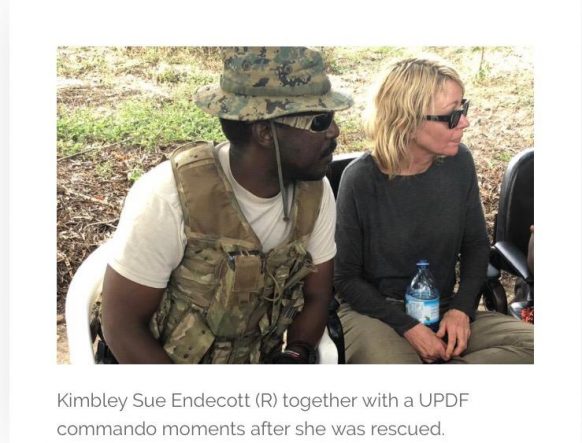 We are glad to inform you that the American Citizen Kimberly Sue Endicott and her driver guide Jean Paul Mirenge were rescued and are safe.

Following the alert of security forces, a task force led by the Uganda Police Force was put in place to kick off a search and rescue operation of the tourist and her driver. On Sunday, April 7, 2019, the two were successfully rescued and brought to safety by Uganda security agencies.

Ms. Kimberley Sue, was on Monday, 8th, April, 2019, handed over to Her Excellency, the U.S. Ambassador to Uganda, Deborah Ruth Malac at the American Embassy in Kampala by Inspector General of Police, Okoth Ochola.

In a statement by the Uganda Police Force, no ransom was paid as it was circulating on different social media platforms before. The fact is that the victims were released as a result of the implicit threat of the use of force after the armed captors knew that they were being pursued by various security agencies.

According to the Uganda Police Force, the operation to arrest the culprits is still ongoing with the close coordination of their police counterparts from the DRC, with whom they have been working with for the last 6 days. It is reported that arrests have been made in that regard.

Security in Uganda and its National Parks

The Queen Elizabeth National Park is open and safe for visitation and Uganda safaris continue to go on smoothly.

Through the Uganda Wildlife Authority and security agencies, new measures as well as strict guidelines to avoid similar incidents have been put in place. Security has been tightened in all of Uganda’s national parks for tourists’ safety. Tourists are encouraged to continue undertaking safari to Uganda and to enjoy wildlife abundance in the Pearl of Africa.

We wish both, Ms. Kimberley Sue Endicott and her safari guide, Jean Paul Mirenge, a happy reunion with their families, as security forces continue to appraise the kidnap and rescue operation, to ensure such an occurrence does not happen again.

About Uganda-the Pearl of Africa

Placed within the Nile basin in the East African region, Uganda lies along coordinates 1000N and 32000E on both sides of the equator. Situated West of Kenya, East of the Democratic Republic of Congo, South of South Sudan and North of Tanzania and Rwanda. Uganda is a land locked country, without any hinderances to thrilling adventures because of the immense water bodies like the Nile river which is the world’s longest river and Lake Victoria which is the world’s largest continental lake.

Uganda is 241,551km2   with landforms physically influenced by the processes of down warping and up warping. Water bodies cover 41,028km2 and land covers 200,523km2. The highest point is 5,109m(16,763ft) above sea level at Margherita peak on Mountain Rwenzori which is the 3rd highest peak and the tallest mountain range in Africa offering a mystical challenge to hikers on mountain hiking tour Uganda. The lowest point is 614m above sea level within the great western rift valley in lake Albert. Uganda’s elevated altitude has long given it a cool tropical climate than other places that fall on the equator line with mean temperatures about 260C(780F)

Pearl of Africa slogan rightly proves the superior value of Uganda because the stunning green valleys, high towering mountains and deep immense lakes that Churchill quoted then are still existent today. Uganda takes pride in her plethora of natural beauty explored by tourists on Uganda wildlife tours some of which is conserved in the exceptional 10 national parks all safe and open to tourist visitations. Within East Africa, you can also continue for a Rwanda safari, Tanzania safari, Kenya safari or Congo tours for more wildlife sightings.

The isolated incident gratefully ended with a rescue of the kidnapped individuals, I would like to re assure the world that Uganda is safe as a safari destination and is going to continue with all efforts possible to keep tourists safe.