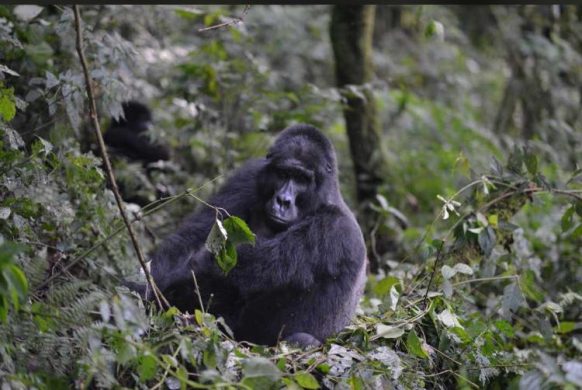 We are sorry to be the bearers of sad news but the Oruzogo gorilla family lost one of its silverbacks. Oruzogo gorilla family one of the habituated Uganda gorilla safari groups is situated in the Ruhija sector of Bwindi Impenetrable National Park Uganda together with Bitukura, Mukiza and Kyaguriro that is mostly used for research. Oruzogo is one of the popular gorilla families in Bwindi Forest National Park Uganda due to its extremely exciting Juveniles that will make you want to keep an eye on them throughout your Uganda gorilla trek safari time. Its lively nature made it exceedingly popular among tourists on Uganda gorilla tours that those that have heard about it, request to trek it when during their gorilla tour in Uganda.

This silverback was found dead by Uganda safari tourists during yesterday’s (24th November 2019) Uganda gorilla safaris. The real cause of his death has not yet been determined however, the Uganda gorilla doctors are busy carrying out a postmortem and the results will be announced soon. 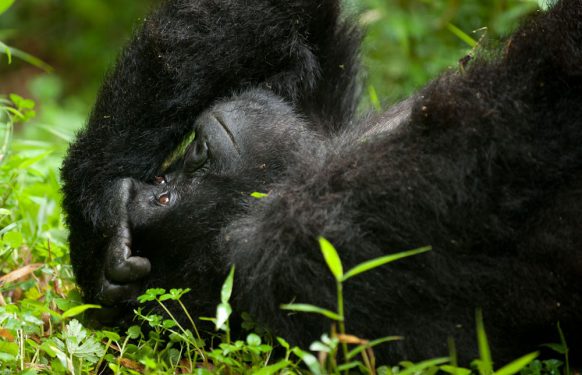 In a heartbreaking series of events, researchers have observed several emotions of gorillas. Gorillas are very intelligent; the loss of a family member can affect them greatly. This kind of emotional awareness is just like that of humans. They partake ritualistic behaviors for example when a member of their family dies or is killed, it’s a great tragedy for the whole family. They all mourn for days and always come back to the place of death day after day. This kind of ritual is similar to a human visiting a gravesite of a loved one. They sometimes have this long lost call they do when somebody is lost in the forest and they want them to come back. They will all sit there over the body and see them ask them to come back, and of course, they can’t.

During a brief talk with one of the researchers, he told us a story about a gorilla that lost its mother. He reported and said, emotionally, it withdrew from his group, became sluggish, stopped feeding, its immune system weakened, he fell sick until it finally died. He further said “The last time I saw this gorilla alive, he had sunken eyes, grown thin and extremely depressed. He often huddled in the vegetation close to where his mother died. The last short journey he made was touching, he paused to rest every few feet, as he moved to the place where the mother had died. He stayed there for several hours until he struggled on a little further, then curled up and never moved again.”

There was also an 11-year-old gorilla that was observed by travellers who had undertaken a gorilla safari in Uganda, grieving the loss of her infant. One of our clients that tracked that guerrilla group said, “I have never seen of an animal in distress.” He was touched by the way this animal felt.

The Olden Times of the Oruzogo Gorilla Family

Oruzongo derived its family name from one of the famous plants found in Bwindi Impenetrable Forest National Park known as “Oruzogoto” situated within its home range. The Uganda Wildlife Authority team started habituating this Bwindi Forest gorilla family began in 2009. The individuals’ aggression towards the habituated team steadily decreased as time went on.  After identifying all individuals as well as ascertaining the age and sex for each. Based on the level of habituation and observations by the gorilla habituation team, the group was opened to Uganda gorilla trekking safari visitors in 2011 and today it is one of the most popular gorilla families in Bwindi Forest National Park Uganda.

What Takes Place During Gorilla Habituation?

Agreeing with the experts, the mountain gorilla habituation process is a lengthy and difficult process. We all know these are purely wild animals and the exercise to habituate wild gorillas principally requires that these mountain gorillas lose their natural fear of humans and develop a trustful relationship with observers (tourists).

The habituation team often does a daily gorilla trekking Uganda tour to this group under habituation in order to monitor these gorillas. Slowly over time, the gorillas stop running away from the observers and eventually become accustomed to the presence of people. During this process, the Uganda gorilla habituation team gets to identify the group individuals as well as understand the group composition. This is done in order to minimize the negative impacts that visitors can have on the gorillas as well as make sure that the group is at a stage where their normal social behaviours are not interrupted by visitors.

How they Named Individuals in the Oruzogo Family

This brings the Oruzogo gorilla family to 16 family members. The identity of the silverback that passed away hasn’t yet been revealed but as far as I know, it was not family head.

There is no doubt that Uganda adventure safari holiday travellers have embarked on Africa safaris in Uganda just to have lifetime encounters with Uganda’s endangered mountain gorillas in their natural habitats of Bwindi Impenetrable National Park and Mgahinga Gorilla National Park. During the dry season, Bwindi Impenetrable Forest and Mgahinga National Park are flocked by thousands of tourists interested in Uganda gorilla safari trips.

Taking a 2-3 hours trek (minimum) up the Bwindi Impenetrable Forest and Mgahinga Gorilla National Parks’ bamboo forest, gives you an opportunity to encounter these gentle apes. Reaching the gorillas requires navigating uphill and downhill through thick tangles of vines, thorns, and roots. As part of your adventure, in a group of 8, your walk experience will take you through the past shoulder-high grasses of the forest, characterized with stinging nettles, and night-black fur penetrating the vegetation. It a nice experience provided you dress in the right clothes; how to dress for a gorilla trekking Uganda safari

There are no paths, no signs, no directions and no clearings. At the back and in the lead are your Uganda safari tour park ranger guides, accompanied with a Uganda tourism police officer to ensure your whole gorilla tour Uganda experience is safe. These gorilla trekking Uganda tour rangers stalk nearer with machetes in hand to help them push aside bushes making it clear for you. The walk is done at a minimal pace to keep you lively. Within no time, you will be at your assigned Uganda gorilla trekking safari mountain gorilla family. This is the best opportunity to observe these gentle apes’ everyday interactions that behave just like humans.

For about an hour, you will observe your mountain gorilla family. Meetings face to face with mountain gorillas in the jungle is one the most breathtaking and unforgettable experiences for trekkers undertaking tours in Uganda. Just like our families, a father is the family head. Similarly, you will encounter a silverback gorilla energetically watching over its family. A silverbacks’ mass is amazing, yet his power food is just a diet of leaves. This male leads a harem and their offsprings that normally converge around their boss to make a family.

Uganda safari tour tourists don’t always miss out capturing moments like this on camera. After a rush of snapshots, tourists get mesmerized by the wonder of being close to these gentle apes; mountain gorillas. I had always wondered why tourists get excited after seeing these gorillas during their gorilla safaris Uganda, during their gorilla trek safaris Rwanda and during the gorilla tours in Congo. Having experienced the excitement, perhaps it’s their similarity to us! Or maybe those familiar hands and the expressions! Honestly, their humanlike expressions prompt you to anxiously keep your sight on them. I think the exact difference between their kind and ours is that they are in the wild!

Enjoy a descent slope down using the same trail to get back to your starting point so you catch up with your guide. Safaris in Uganda teach you survival skills as for this case you may require to grasp onto bamboo for balance. Now that you have time, you will have a glance at some of the rare birds in a rain forest. For bird fanatics, this is the best chance to hit two birds with one stone. A Uganda birding safari in the rain forest gives you chance to see up to 23 Albertine endemics such as the Short-tailed Warbler and Blue-headed Sunbird as well as seven IUCN red data listed species.

You also have other opportunities trekking mountain gorillas during your Africa wildlife safari in Rwanda and Congo. During your visit in Rwanda or Rwanda safari, you can enjoy your Rwanda gorilla safari in Volcanoes National Park.

When you choose to go on a Congo safari, engage in Congo gorilla trek safari in Virunga National Park Congo. Trekking in these two destinations gives you the same feeling as you would in Uganda and Rwanda. Why? These are the same species of gorillas that you will be seeing, the gorilla trekking process is the same and you will spend with them the same time; 1 hour.

when you look at a sample of our trip advisor reviews, a good number of tourists have a lot of adventure stories to tell about their experiences during their Uganda gorilla safaris. We are also experts in tailoring combined Africa safaris, therefore, you can supplement your Africa tour with other another country tour. Have a look at the following;