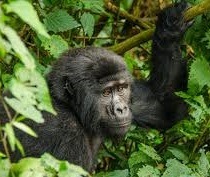 The Uganda Wildlife Authority an organization that is responsible for management of national parks which are also encountered on Uganda safaris and tours has embarked on a surprise move to reduce the gorilla permits for the months of June in the Uganda gorilla trekking safari destination of Mgahinga Gorilla National Park.
The permits have been reduced to $350 from the normal $600 which is always charged in the high season beginning June every year. This amount is for foreign nonresidents that would wish to go gorilla safaris in Uganda. the Ugandan and East African Citizens in general are set to benefit more as their permit has been reduced from 250,000/= to 150,000/=. This is intended to increase the world travelers that undertake gorilla safaris to Uganda and particularly to Mgahinga Gorilla National Park.
Mgahinga Gorilla National Park is re-known for its one habituated gorilla family named Nyakagyezi and this group contains fourteen (14) members which thrive on the volcanic slopes of Sabyinyo, Gahinga and Muhabura Mountains. The Mgahinga Gorilla National Park has been facing stiff competition from the adjacent Bwindi Impenetrable National Park which contains 400 of the 880 mountain gorillas that still exist in the world the Rwanda’s Volcanoes National Park where gorilla trekking safaris in Rwanda are always carried out.
The two parks in Uganda namely Bwindi and Mgahinga always offer discounted gorilla permits in the months of April, May and November but this surprise offer by Mgahinga to continue offering a discounted gorilla trek would definitely give it a hand in competing with the re-known destinations like Bwindi.
Mgahinga Gorilla National Park also has a range of thither activities like Golden Monkey tracking, the Volcano climbing; the Batwa heritage tour and the gorge walk which combine to make the destination worth encountering by travelers on Uganda safaris and tours.
Uganda safaris/Uganda safari News
Prime Uganda safaris & Tours Ltd