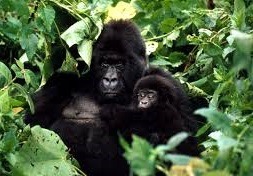 High above in the forested mountains of Western Uganda lives nearly half the population of the world’s most, endangered but eye-catching faunal species. Some researchers once thought that by the twentieth century, Mountain Gorillas would seize to exist, but they have endured harsh conditions ranging from the modification and destruction of their habitats to gun shots as a result of wars in surrounding areas.
Coming eye to eye with these amazing animals in a guided Uganda Gorilla Safari is an experience that will keep flashing in one’s mind, and is a memory that will last for a lifetime.
Like dinosaurs that are believed to have roamed the earth in the previous age, there are indeed not many animals which have more brightly ignited our age with such great magnificence as the Mountain Gorillas, the largest of primates left to our world today.
A normal gorilla will be seen to have four powerful limbs, no tail, and a face not dissimilar from that of man, a reason why I would agree with some scientists that have claimed a 94% (ninety four percent) level of similarity between these apes and their more developed brothers the humans. Unlike hairs on man’s skin, gorillas have fur that enables them to adapt to the cold mountainous environments which they call home.
While on a Gorilla Trekking Safari in Uganda, a maximum of 8 (eight) tourists are permitted to see and take photos (flash photos are prohibited) of one of the 12 (twelve) habituated gorilla families in Bwindi Impenetrable National Park and the other 1 (one) in Mgahinga Gorilla National Park.
With strength comparable to 8-10 men and rising to an average height of about 1.7 m (6 ft.), weighing between 140 and 275 kg, the silver-backs (male gorillas) spend the greater part of their days rummaging for food to bring home to their families. The female gorillas are much smaller but size does not limit their powerfulness.
Another fact that you will also be able to confirm while on a Gorilla Safari in Uganda is their calmness. It is a “cocktail of feelings” when you encounter these muscular creatures especially the silver-backs (male gorillas). The fear for these biggest apes within you might make your tummy rumble but you ought not to be so fearful because these are very shy and retiring rather than treacherous and ferocious animals.
Conservation efforts in the two National Parks of Bwindi and Mgahinga paint a more hopeful picture of the continued existence of gorillas and the continued operation of heartwarming Gorilla Safaris in Uganda.
Uganda safaris/Uganda safari News
Prime Uganda safaris & Tours Ltd