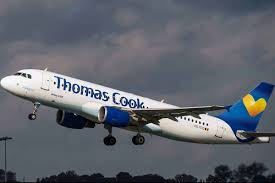 Thousands of people have been saddened by the abrupt demise of the London- British travel group Thomas Cook. Thomas Cook was the pioneer of organized travel and has been such a strong force in the travel industry. Being one of the oldest leading travel companies, Thomas Cook has was employing over 21000 people that have been left jobless. It’s upsetting to see so many people lose their jobs and thousands of holidaymakers affected by disrupted travel.

Thomas Cook on Monday 23rd September 2019 declared its bankruptcy after failing to reach a last-ditch rescue deal, triggering the UK’s biggest repatriation since World War II to bring back tens of thousands of stranded passengers. The news leaves a reported 600,000 tourists stranded worldwide, including around 150,000 holidaymakers seeking help from the British government to return home.

Both a tour operator and an airline, the travel giant’s key destinations were in Southern Europe and the Mediterranean but it also offered holidays in Asia, North Africa and the Caribbean.

The 178-year-old operator, which had struggled against the fierce online competition for some time and which had blamed Brexit uncertainty for a recent drop in bookings, had been desperately seeking £200 million ($250 million, 227 million euros) from private investors to avert collapse.

In a statement published in the early hours of the morning, Thomas Cook said that “despite considerable efforts” it was unable to reach an agreement between the company’s stakeholders and proposed new money providers.

“The company’s board has therefore concluded that it had no choice but to take steps to enter into compulsory liquidation with immediate effect,” the statement added.

“Following the collapse of Thomas Cook and the cancellation of all its flights, Transport Secretary Grant Shapps has announced that the government and UK Civil Aviation Authority has hired dozens of charter planes to fly customers home free of charge,” a statement said, describing it as the largest repatriation in peacetime history.

“All customers currently abroad with Thomas Cook who is booked to return to the UK over the next two weeks will be brought home as close as possible to their booked return date,” the government added. 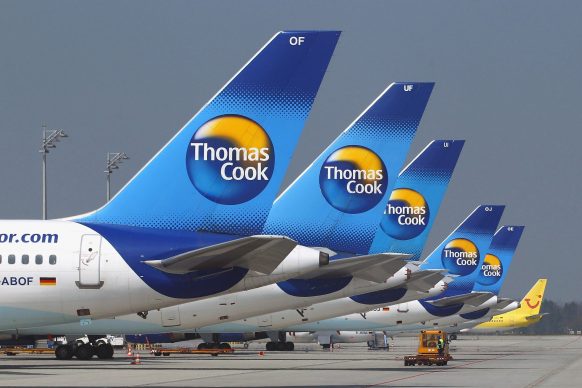 Thomas Cook had secured a £900m rescue deal led by its largest shareholder Chinese firm Fosun in August, but a recent demand from its banks to raise a further £200m in contingency funding had put the deal in doubt. Fosun said in a statement: “We extend our deepest sympathy to all those affected by this outcome.”

The holiday company spent all of Sunday in talks with lenders trying to secure the additional funding and salvage the deal but to no avail.

Thomas Cook has blamed a series of issues for its problems, including political unrest in holiday destinations such as Turkey, last summer’s prolonged heatwave and customers delaying booking holidays because of Brexit.

“Now everybody can pretend they are a travel agent. They’ve got access to all the airline seats, hotel beds, car rentals in the world and they can put things together themselves.

Mr Calder, a travel editor at The Independent, added that planes at the airport began to be impounded shortly after 00:00 BST.

While the company was closing shops to try and cut costs, closing 21 in March, it still had more than 500 outlets, bringing large costs compared to online competitors.

In another sign of its slow progress in mending its finances, it only stopped dividend payments to investors in November. “It is a matter of profound regret to me and the rest of the board that we were not successful,” he said. “This marks a deeply sad day for the company which pioneered package holidays and made travel possible for millions of people around the world,” he added in the group’s statement.

Reports said a collapse of the group would mean the repatriation of 600,000 tourists, including around 150,000 seeking government help returning to the UK.

Two years ago, the collapse of Monarch Airlines prompted the British government to take emergency action to return 110,000 stranded passengers, costing taxpayers some £60 million on hiring planes. As well as the grounding of its planes, Thomas Cook has been forced to shut travel agencies, leaving the group’s 22,000 global employees — 9,000 of whom are in Britain — out of a job.

Chinese peer Fosun, which was already the biggest shareholder in Thomas Cook, agreed last month to inject £450 million into the business as part of an initial £900 million rescue package. In return, the Hong Kong-listed conglomerate acquired a 75 per cent stake in Thomas Cook’s tour operating division and 25 per cent of its airline unit.

“Fosun is disappointed that Thomas Cook Group has not been able to find a viable solution for its proposed recapitalization with other affiliates, core lending banks, senior noteholders and additional involved parties,” the Chinese group said in a statement to AFP on Monday.

Cabinet maker Thomas Cook created the travel firm in 1841 to transport temperance supporters by train between British cities. It soon began arranging foreign trips, being the first operator to take British travellers on escorted visits to Europe in 1855, to the United States in 1866 and on round-the-world trips in 1872.

Thomas Cook grew into a huge operation, becoming both a tour operator and an airline, but fell into massive debt despite the recent annual turnover of £10 billion from transporting about 20 million customers worldwide.

What is the government doing?

Transport Secretary Grant Shapps defended the move not to grant Thomas Cook a bailout. “I fear it would have kept them afloat for a very short period of time and then we would have been back in the position of needing to repatriate people in any case,” he said on the BBC’s Today programme.

The company’s large debts and High Street-focused business made it a poor candidate for survival, he said. Overall, Operation Matterhorn will cost the taxpayer around £100m, he added.

Shadow chancellor John McDonnell told the BBC the government should have bailed out Thomas Cook, “if only to stabilize the situation while a real plan for the future of the company could be addressed”.

Prime Minister Boris Johnson pledged to help stranded holidaymakers, but also questioned whether company directors were properly motivated to “sort such matters out”.

Several Disneyland dreams have been ruined

Early this Monday morning, Leanne Jones, a mother of two small boys, found out that the Thomas Cook vouchers she was given as presents by her family towards a holiday are worthless. “I’m feeling rubbish, she said. “Every birthday and Christmas over the last two years I’ve been saving Thomas Cook vouchers to take my two young children on their first holiday abroad – Disneyland was the plan”. “I’ve got £800 worth and was planning to fly out next summer. I stand to lose all the money from the vouchers and my children will no longer get their holiday.”

Ms Jones, who lives in Milton Keynes, has been in contact with Air Travel Organizer’s License scheme (Atol) but says the vouchers are not covered by its protection scheme. “There is nothing anyone can do to help.”That’s it, I’m going to have to start saving again. I have no other option. We’ll have to wait another two years for our next holiday.” It was her dad’s idea that the family gives holiday vouchers, and he’s now feeling a little guilty, she says. “It’s not his fault at all. It was a good idea at the time.”

How will holidaymakers get home?

While an estimated 150,000 Britons are affected by Thomas Cook’s collapse, the company has up to a further 450,000 customers abroad, some of whom have been affected. In Germany, one of Thomas Cook’s main markets, insurance companies will help organize the response to its collapse. UK customers will be brought home “as close as possible” to their booked return date, the Department for Transport (DfT) has said. Customers will be on special free flights or booked on to another scheduled airline at no extra cost, with details of each flight to be posted on a dedicated website as soon as they are available.

The DfT added that a “small number” of passengers might need to book their own flight home and reclaim the costs.

Customers have been urged not to cut short their holiday or go to the airport without checking the website for more information about their return journey.

The CAA is also contacting hotels accommodating Thomas Cook customers, who have booked as part of a package, to tell them that the cost of their accommodation will be covered by the government’s Air Travel Trust Fund and Air Travel Organiser’s Licence scheme (Atol).

Tim Johnson, policy director of the CAA, told BBC News that customers whose future holidays had been cancelled would be informed of how they can claim a refund on the website.

Business Secretary Andrea Leadsom has said she will write to the Insolvency Service urging them to “fast-track” their investigation into the circumstances surrounding Thomas Cook’s going into liquidation.

What has happened to the staff?

Employees at some Thomas Cook shops have already been met with representatives of the firm’s administrators, who told them they would be made redundant. Jobs at the tour operator’s airline and in its engineering division may also go. Some workers are being kept on, however, but there is no definite number. Thomas Cook shops across the UK are not due to open on Monday.

What will happen to Thomas Cook’s international operations?

For now, Thomas Cook’s Indian, Chinese, German and Nordic subsidiaries will continue to trade as normal. This is because, from a legal standpoint, they are considered separate to the UK parent company and are not under the jurisdiction of the UK’s Official Receiver. They do, however, share services such as aircraft and IT with their parent company and will need to strike rescue deals in the coming weeks to keep trading.

How will people fight for their rights?

People on a package holiday are covered by the ATOL scheme. The scheme will pay for their accommodation abroad, although they may have to move to a different hotel or apartment.

Atol will also pay to have you brought home if the airline is no longer operating.

If you have a holiday booked in the future, you will also be refunded by the scheme.

If you have booked a flight-only deal, you will need to apply to your travel insurance company or credit card and debit card provider to seek a refund.

When Monarch Airlines collapsed in 2017, the government organised to bring home all the stranded passengers, whether they were covered by Atol or not.