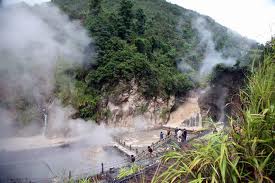 in volcanoes national park is mainly based on sibyinyo silverback lodge which was constructed by the government with the support from the international partners and it was later handed over to the cooperative of the local people, since they would benefit from the incomes generated from the tourists who come for safaris to Rwanda.

This place is a home to many mountain gorillas which are mostly found in volcanoes national park. These have attracted many gorilla trekking safaris to Rwanda, which has helped in raising high revenues to the country. This model also helped in converting the former poachers who were killing the animals and later they were converted to conserving and preserving the wildlife in the national parks.

The local communities have greatly been involved in the initiative and this has helped them to completely involve in the development of tourism in Rwanda. These communities have taken the gorillas as valuable Assets which need to be protected in order to encourage gorilla trekking tours to Rwanda. This will also help in raising high revenues to the country.

The model is mainly concerned about the local people who will benefit through producing their crafts and other products so that they earn some incomes, hence encouraging them to participate directly in tourism development with in the country. This will help in increasing the number of tourists who come for safaris to Rwanda.