What to know about Mountain Gorillas-Uganda Safari News 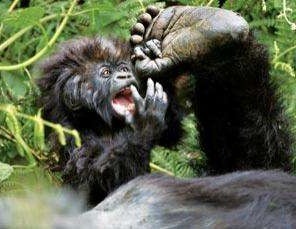 The mountain gorillas are large, strong apes occupying Africa’s volcanic slopes and these are considered to have few natural predators. However, due to harmful human activities, such as habitat destruction, poaching and civil wars, the mountain gorilla which can be only encountered on Uganda gorilla trekking safaris in Africa, has become the world’s most endangered ape species.
Currently, the mountain gorilla’s natural habitat is only restricted to protected national parks in two parts of Africa. One group of Mountain gorillas can be confronted on Gorilla trekking Safari in Uganda‘s Safari destination of Bwindi Impenetrable National Park situated in south western part of the Uganda. The other group is distributed over the three neighboring national parks of Virunga national park in Democratic Republic of Congo, Mgahinga Gorilla Park in Uganda, and Volcanoes national Park in Rwanda.
Mountain gorillas which can be only trekked while on your Gorilla trekking safaris to Uganda or Rwanda are described as strong but shy apes. However when threatened, they turn to be aggressive and that is why trekkers on Uganda gorilla safaris are given guides on how to behavior while staying with the apes. They beat their chests and let out angry grunts and roars. Gorilla Group leaders-Silverbacks will charge at the threat while the Mothers will do whatever it takes to protect their young ones. All these interesting behaviors of the mountain gorillas can be explored when one undertakes Mountain gorilla trekking safaris and tours to Uganda or Rwanda.
Mountain gorillas live in social groups round to 30 individual gorillas. The troop or group is led by one powerful male identified as silver-back. The male Gorilla is dubbed silver-back because of the silver stripe it possesses on its back. The oldest male gorilla of the group -Silver-back is at least 12 years old. A Gorilla troop or groups is composed of various younger males, adult as well as juvenile females, and infants.
Besides offering protection to gorilla group members, the Male silver-back decides all the activities to be done in the group and also maintains order among the group members. The leader is in charge of programing feeding trips, travel time and resting time. They also express parental care to the majority of the young gorillas in the group.
Female mountain gorillas can give birth at age 10 years. Just like female human beings, female gorillas also carry one or two babies at a time and give birth after a 8.5-month gestation period. In general, they tend to bear between two and six offspring in a lifetime.
Newborn gorillas weigh about 1.8 kgms at birth and during time of birth, they are as uncoordinated and weak as human babies. For the first four years of their lives, they get around by clinging to their mothers backs. By 3.5 years of age, the young gorillas are fully weaned from their mother’s milk and start feeding on leaves, plants, roots and shoots as mature Gorillas.
Fully-grown male mountain gorillas can weigh up to 180 kg and Females tend to weigh half that of the Male Mountain Gorilla at about i.e. 90 kg. In addition to the silver stripe on Male Mountain gorillas’ backs, they are identified from females by the crest of fur on their heads. Both Male and Female have similar thick black hair covering their body. Their thick hair keeps them warm in cold mountain temperatures and hence their adaptability to the cold areas of Virunga Massifs and Bwindi Impenetrable Forest.
In nut shell, the only opportunity left in the whole world for one to encounter Mountain Gorillas in the Wild is by booking Gorilla safari tour to Uganda –the pearl of Africa or Gorilla trekking safari to Rwanda-the land of thousand hills.
Uganda Safaris / Uganda Safari News
Prime Uganda Safaris and Tours Ltd