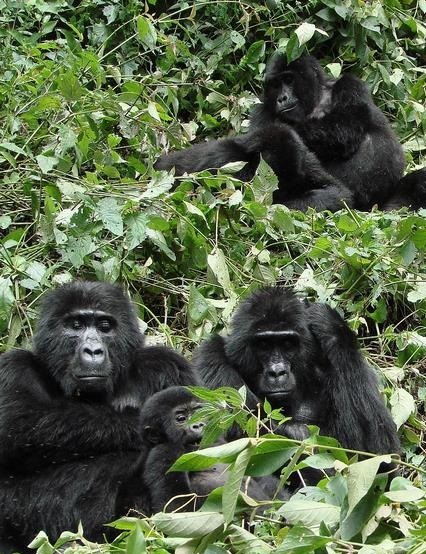 ganda and Rwanda are among the three world countries that have got populations of the critically endangered mountain gorillas. The mountain gorillas are rare species and take long to produce add multiply fast and yet their habitat is fragile a reason that they have been categorized as critically endangered by the International Convection for Union of Nature. Their presence in these countries means that gorilla trekking safaris in Uganda and Rwanda are the way to go.
However, the question would be where exactly one should go for gorilla trekking while on a gorilla safari in Uganda or on gorilla safaris in Rwanda. It should be noted that Uganda which has been dubbed the Pearl of Africa has two destinations where Uganda gorilla safaris can be conducted. These include; Mgahinga Gorilla National Park and Bwindi Impenetrable National Park. The Bwindi Park alone has 400 out of 880 mountain gorilla populations that are currently known to existing in the wild while Mgahinga has up to 14 members. This richness in terms of gorilla populations presents a strong ground for the mentioned activity.
In Ronda, there is Volcanoes National Park in the north west of Rwanda perched on the slopes of the Virunga Volcanoes. It is the only haven for mountain gorilla in Rwanda and it is where all gorilla trekking safaris in Rwanda are carried out.
In both of these countries, the travelers need gorilla permits to do the gorilla tracking and each country has got a differing price from the other. The gorilla permit in Uganda costs $600 for the foreign nonresident while in Rwanda; the permit is given at $750. Sometimes Uganda offers promotional gorilla permits at $350 and this tends to occur in the months of November, May and April. A surprise high season discounted permits for Mgahinga in the Months of June has been considered for Uganda meant to increase the number of traveler planning gorilla safaris to Uganda. Unfortunately, Rwanda does not offer discounted gorilla permits.
Uganda Gorilla safaris/Uganda gorilla safari News
Prime Uganda safaris & Tours Ltd