The calendar of events for Uganda is not just for one day, the celebrations are running from the 7th of February 2019 to the 3rd of March 2019 on Uganda safari awareness and charity activities. The last day celebrations are to be held at Boma grounds, Arua in the West Nile region of the country and President Museveni expected to grace the event as the chief guest.

“The national World Wildlife Day 2019 celebrations will be held at Boma ground in the West Nile District of Arua under the theme Harmonious living between Wildlife and People,” said Prof Kamuntu.

Mr. Kamuntu noted that, the theme of the day reminds us of the need to ensure peaceful co-existence between wildlife and people.

The World Wildlife Day is to celebrate the many beautiful and varied forms of wild fauna and flora and to raise awareness of the several benefits that conservation provides to humanity.

With her unique location at the zone of overlap between the East African savannah and west African rain forests, Uganda boosts of a rich and diverse wildlife heritage with a recorded 18,783 species of flora and fauna. Just the landscape alone is one that is distinctly blessed with unrivalled beauty ranging from the great rift valleys to lake basins, rolling plains, tropical forests, vast savannahs to permanently snowcapped mountains. In these varied landscapes are several wildlife species unique to many countries of the world. 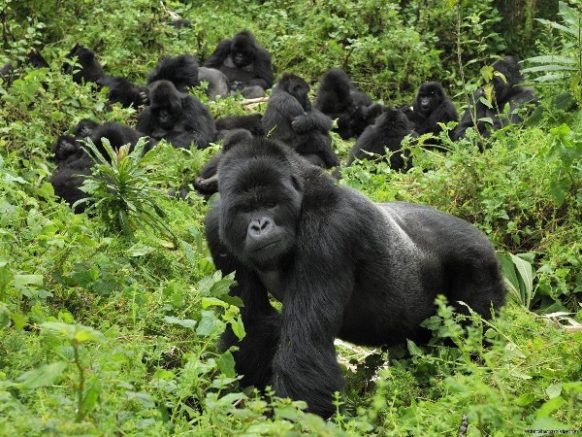 Uganda is host to 53.9% of the world’s remaining population of Mountain gorillas that survive in Bwindi Impenetrable National Park and Mgahinga Gorilla National Park. Only three countries in the world have mountain gorillas which are Uganda, Rwanda and Congo with Uganda gorilla trekking safaris becoming increasingly a popular Africa safari activity.

Uganda is a birders’ (bird watching) haven boosting (11% of the worlds and 50% of Africa’s bird species), this makes Uganda birding safaris the sought-after activity for passionate birders.

Besides the Mountain Gorillas and diverse bird species, Uganda is host to 8% global and 39% Africa’s mammal diversity, 19% of Africas Amphibian species, 14% of Africa’s reptile species and 1,249 recorded species of butterflies. Uganda wildlife safaris are those that many tourists appreciate because of the uniqueness in this beautiful small country. Uganda has successfully been able to re-introduce Rhinos to the country after they had gone extinct in the early 1980s. of recent, the initial population of 8 has bred and multiplied to 24 individuals only found at Ziwa Rhino Sanctuary and available for tracking with many tourists on wildlife safaris in Uganda to Murchison Falls National Park always making a stop at the sanctuary. This makes Uganda a host to the big five African wildlife species (Buffaloes, Rhino’s, Elephants, Lions and leopards).

With all these attractions and activities in Uganda, tourism is now the leading foreign exchange earner for the country bringing in 23.5% of the total exports annually from Uganda safaris.

Let’s all celebrate the beauty in the diversity placed within this small, beautiful, landlocked country with the most diverse cultures and hospitable people, choose an activity to involve in today and let tourism make a positive impact to the community.