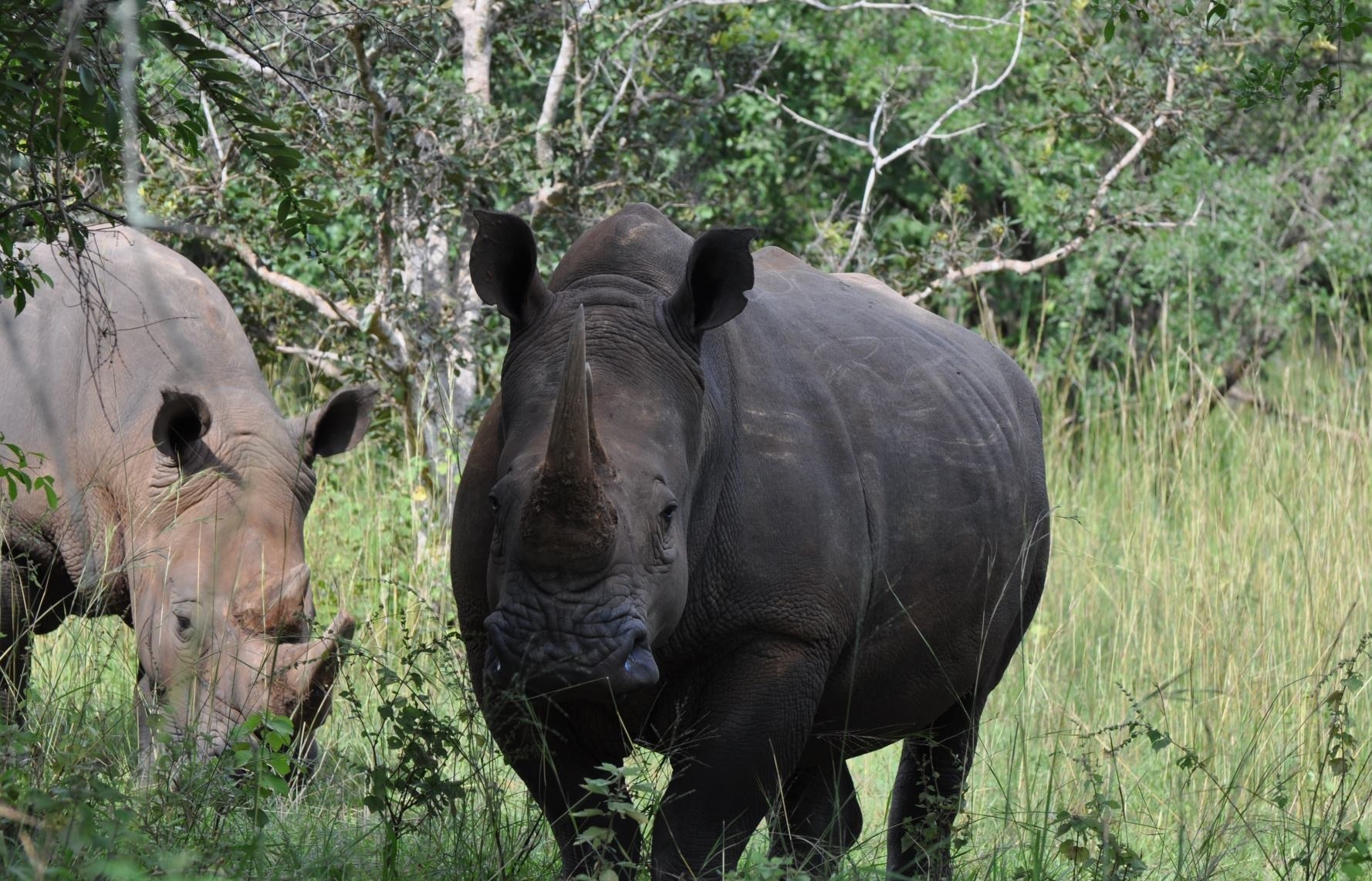 When the world “only” is used to explain something, then that particular “something” is worthy exploring. Located 176 km from Kampala using the Kampala – Gulu highway is the “only” place in Uganda where wild rhinos can be visited in their natural habitat. And to our advantage the sanctuary is open to Uganda tours and safaris. Ziwa Rhino Ranch was established in 2005 in a bid to reintroduce the wild rhinos which had ceased to exist in Uganda. Thanks to the efforts of Uganda Wildlife Authority (UWA) and the Rhino Fund, Uganda today  has a total of 15 wild rhinos living in their natural habitat.
Unfortunately, a number of people in the past have not seen the value in keeping them alive. Rhinos have continually been hunted down because of demand in Asia for their horns. A number of doctors in Asia have claimed that the horns can be used to cure diseases like epilepsy, malaria and impotence but this has not been proven to work, yet so many rhinos have been lost in the process.
Let us talk about few interesting things about white rhinoceroses. The rhino is a very interesting mammal; one the most fascinating animals you will see while on your safaris and tours in Uganda.
White rhinos in particular are the largest land mammals after the elephants. They are plant eaters and use their senses of smell and hearing more than they use their eyes. Despite the size of their brains which is very small compared to their body size the rhinos are very wise animals which cannot easily be fooled.
Surprisingly, female rhinos carry their babies for a time way longer than many other animals (15 to 16 months); including the dearest lionesses which only suffer the burden of pregnancy for a mere four (4) months, often less. After giving birth to her calf, most mother rhinos will never introduce their young ones to their fathers.
If fortunate enough, but from a distance, tourists will confirm that rhinos are awesome sprinters while on their Uganda Safaris to Ziwa Rhino Ranch. It is highly advisable to keep a reasonable distance away from the rhinos because if annoyed, man cannot out run them. Researchers have established that rhinos accelerate to a speed between 30 and 40 miles per hour (mph); faster than Usain Bolt’s 23.7 mph record. I was also able to establish that the rhino’s horn is not made out of bone, but is from a protein called Keratin, which is the same material in our hair and nails. Under the leadership of a ranger guide, tourists can enjoy rhino safaris in Uganda’s Ziwa Rhino sanctuary without putting their lives at risk.
Adding to the rhinos, Ziwa Rhino Sanctuary has over 250 bird species including the rare shoe-bill, crested francolin, the African morning dove and the Abyssinian ground hornbill making it an ideal destination for birders.
Tourists on their way to Murchison falls National Park can also make detours to Ziwa Rhino Sanctuary to encounter the amazing creatures. Visitors should not worry much about where to stay because the Rhino ranch offers accommodation to her clients in its guest house and campsite. Meals are also served in the restaurant. Ziwa Rhino Sanctuary is a place worth visiting. It is one of the few places around the world where wild white rhinos can be seen in their natural habitat.