The only home to wild Rhinos in Uganda!

Uganda is just one of a kind when it comes to wildlife diversity. Ever wondered meeting all the big 5 wild game (Buffaloes, Rhinos, Elephants, Leopards and Lion) just in a single safari? Safari Uganda and encounter the big five of the jungle with rhinos at Ziwa rhino sanctuary 171km from Kampala-Uganda’s capital. Buffalos, Elephants, Leopards and Lions are seen at Murchison Falls National Park 128km from the Sanctuary. Ziwa Rhino sanctuary comes to position as the only home to wild rhinos in Uganda.

The rhino sanctuary was established in 2005 by a collaborative effort of Uganda Wildlife Authority, Rhino Fund Uganda (a private non-profit organization) and Ziwa Ranchers Ltd (a private land management company) to re-introduce the southern white rhinoceros. The black Rhinoceros and Northern White Rhinoceros were once indigenous to Uganda but got instinct by 1982 however, the good news is that during Uganda safaris the Rhinos can be trekked at Ziwa rhino sanctuary. The sanctuary started with 6 rhinos but of recent they number to 23 rhinos.

The place that breeds rhinos for re-introduction in the wild -Ziwa rhino sanctuary is situated in Nakasongola district near Nakitoma village in the Kafu river basin of Uganda. The sanctuary is south of Murchison Falls National Park (3,893km2) -the largest protected national park in Uganda. Ziwa rhino sanctuary sits on 70sqkm (7000ha) with tight security, surrounded by 2m(6.6ft) electric fence to keep the rhinos in for sighting by tourists on wildlife safaris in Uganda and keep the poachers away from the sanctuary. It’s perfect for a safari company in Uganda to include Ziwa Rhino Sanctuary and Murchison Falls National Park on a single Uganda safari trip.

What to see/Uganda safari attractions in Ziwa Rhino Sanctuary

Treasured wildlife is hosted by the sanctuary. Ziwa rhino sanctuary is home to the 23 southern white Rhinos including Taleo, Nandi, Bella, Obama, Malaika, Sonic, Zawadi, Lunna, Donna, Laloyo (names are normally given by donors to the sanctuary) and it’s the only place where the wild rhinos are found in Uganda. Other wildlife species include the Uganda Kobs, Oribis, bush bucks, waterbucks, monkeys, antelopes, hippopotamuses and crocodiles found in the wild during a Uganda wildlife tour.

What to do/activities in Ziwa Rhino Sanctuary, Uganda

Rhino trekking is the key safari activity in the sanctuary. Rhino trekking safaris in Uganda to the wild rhinos in their undisturbed habitat is best explored on foot guided by a well-trained ranger. Get to the home of the rhinos and meet Taleo, Moja, Bella, Kori, Hassani, Nandi and their offspring. The tourist drives to the park then takes a bush trek to find the rhinos which takes about 1 and ½ hours to 2 and ½ hours depending on where the rhinos are. Trekking the rhinos in the wild requires closed shoes, long pants, water, insect repellent clothes and……hey yourself! The trek offers the opportunity to sight other wildlife species including the Ugandan Kobs, bushbucks, waterbucks, monkeys, antelopes, Oribis and Hippopotamuses.

Rhino trekking alone isn’t the trekking activity here but yes! the rare shoebill trek is a common one too. Ziwa Rhino Sanctuary is one of the places in Uganda where you are almost always guaranteed to sight the shoebill. The perfect sighting is during the early morning hours at around 06am on a canoe ride through the swamp. This birding safari in Uganda is mainly enjoyed by tourists who lodge or camp at the sanctuary. During the morning trek the Ugandan sunrise is viewed over Lugogo swamp and the activity takes about 4hours. 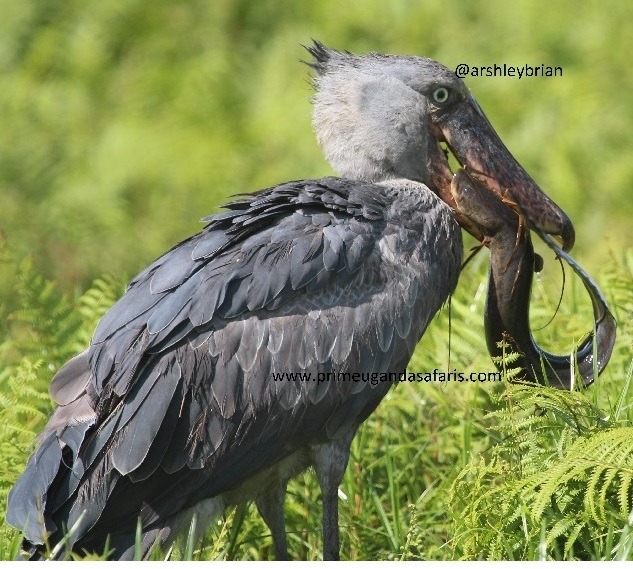 Shoebill after getting its daily prey

Safari guided nature walks and night walks avail a perfect opportunity to exploit vegetation, discover night sounds and sensations from the nocturnal animals that you had never imagined existed. The torches used for night walks are bright enough to bring the bush to day time views, what one bumps into in the wild is not guaranteed.

How to get to Ziwa Rhino Sanctuary

Via Kampala-Gulu Highway the sanctuary is 138km about 2h 22min.

From Entebbe International airport, the fastest route is Masindi-Kampala road is 210km about 4h 3min.

From Nakasongola town, the sanctuary is 56.3km about 49minute drive on Kampala-Gulu Highway then off to a dirt road.

After being captivated by the Rhinos a rest is guaranteed in the nearby tranquil accommodation facilities. There’s accommodation onsite at Amuka safari lodge within Ziwa Rhino sanctuary which has luxury and mid-range facilities. Before and after the activity meals are available at the restaurant and the bar is fully stocked.

Camping at the sanctuary is exceptional either as one is planning to continue Uganda wildlife safari tours to sight the big four at Murchison Falls National Park or from the park and is fully excited by the big five. The camping grounds are pristine and close to the headquarters with electricity run on solar and a generator as back up.

The Rhinos are available at the park all year round but the best Uganda Rhino tour time is during the dry months of December-February and June-August when the grass is short therefore wildlife easily spotted, pictures are clearer not forgetting the dirt roads that are easily passable.

Nature lovers, enthusiastic birders, passionate wildlife seekers have fulfilment when they safari to Uganda because of the amazing wildlife (the big 5), large bird species with beautiful colorful memories. Don’t be the one to miss out on what the wild holds in Uganda.