All You Need To Know About Africa’s Splendid Fresh Water Lake; Victoria

Home » All You Need To Know About Africa’s Splendid Fresh Water Lake; Victoria 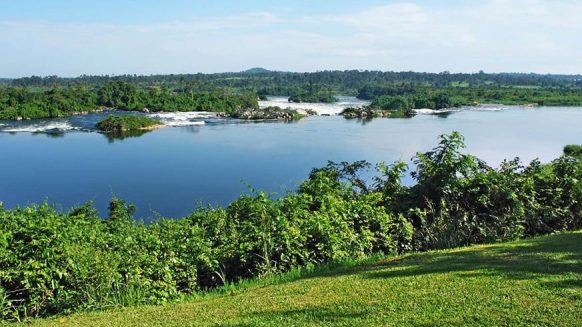 As one lands at the Entebbe International Airport on their safari in Uganda or Uganda tour, it’s very clear that Uganda is no ordinary Africa safari destination that’s why having a Uganda safari tour is a memory-making clue that Uganda is truly the “Pearl of Africa”. On stepping down your first foot at the airport, you will be welcomed by fresh breathtaking air of the “Pearl of Africa. As you’re driven away from the airport by your Uganda safari guide or anyone picking you up, keep awake and keep your car windows low so you don’t miss sighting the mighty freshwater Lake Victoria as you listen to its freshwater wave sound. If you want to see more of this lake outside Entebbe, we can tailor for you a Jinja city tour, or a 1 days Jinja excursion as it can only be seen while in Entebbe and in Jinja.

With an area of about 69,484 sq. Miles, Lake Victoria is one of the great lakes in Africa. It is, in fact, the second-largest freshwater lake in the world after Lake Superior in North America. Lake Victoria lies in three East African countries; Uganda, Kenya and Tanzania. Uganda has a portion that covers around 49%; Tanzania takes about 45% and Kenya 6%. Lake Victoria has an average depth of 40 meters where its deepest point is about 84 meters.

Lake Victoria was named after the queen of England then; Queen Victoria, by the explorer John Hanning Speke in 1858 while he on an excursion with a colleague Richard Francis Burton. They wanted to locate the source of the Nile. 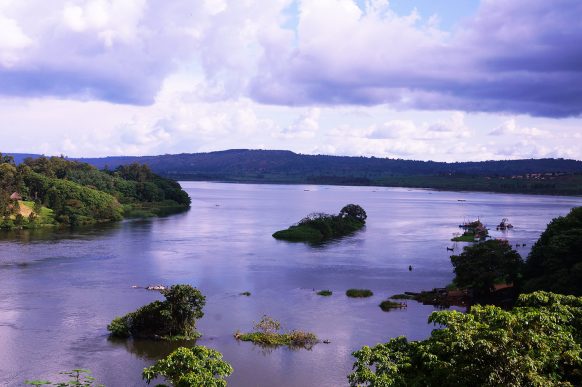 Lake Victoria receives its water from direct rainfall, from some rivers like River Kagera and thousands of small streams. There is only one discharge from Lake Victoria; Victoria Nile. It is the source of Victoria Nile which exits close to Jinja. The Victoria Nile is the Longest River in Africa. The lakes waters are utilized for the production of Hydro-electricity at Kira and Nalubale dam (Owen falls).

The lake houses several reptiles like crocodiles, variable Mud turtles, Williams’s mud turtles, and many others. It is also home several fish species common of which are; Nile tilapia, Nile perch, silverfish, and other species which are used as food by many Ugandans.

Along its shores, lie different ports that help in the transportation of goods and services from one country to another special Kenya and Uganda for example, Kisumu, Mwanza, Bukoba, Entebbe, Port Bell and Jinja. 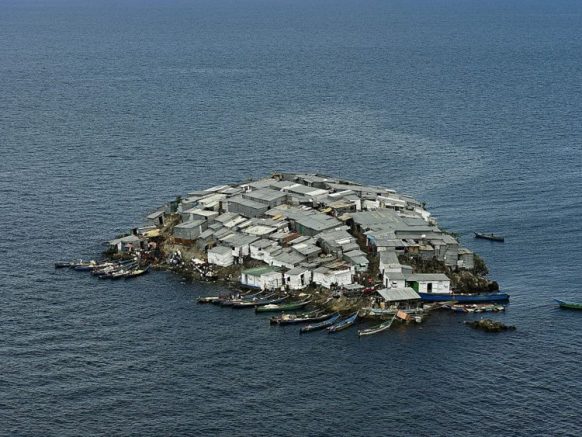 How many islands are on Lake Victoria?

Lake Victoria has a band of different islands totalling to over 84 islands and are one of the major sources of tourists. All these islands are characterized by different shapes, good natural environments, unusual wildlife, special flora, and different people too. These islands include; Ssese islands, the most visited island by travelers interested in honeymoon safaris in Uganda or adventure safaris in Uganda, Ngamba Island which is home to the Ngamba Island chimpanzee sanctuary that is open to tourists interested in Uganda chimpanzee safaris, or a 1 day Ngamba Island tour, Bugala islands, Saa Nane islands among the many.

How do you get to Lake Victoria?

By road, Entebbe is around 40km from Kampala; the capital city of Uganda. When driving, it takes about 45-90 minutes to get to this lake however depending on the day or jam. It is possible to drive yourself there.

If you are using public transport, one can get taxis from the following destinations; the old taxi park, new taxi park, Usafi Taxi Park, Natete park, the junction between Entebbe and Nasser road, and Kibuye taxi park. It is also possible to get there with a hired car or boda.

By air, you will spot Lake Victoria immediately you land at the Entebbe International Airport. This is the only international airport in Uganda, therefore, all the International Flights arrive and depart here.

Attractions in and around Lake Victoria 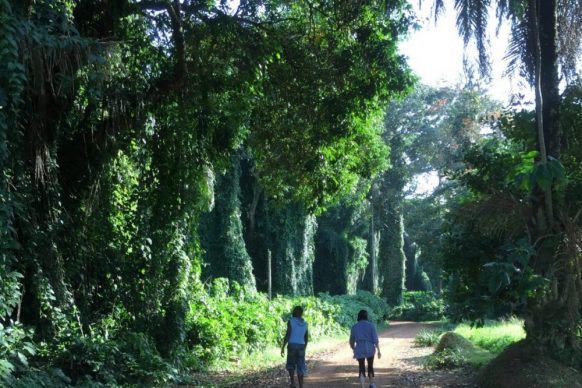 Lake Victoria has several attractions in and around it that amaze people Uganda tours including islands and other destinations. These have attracted tourists to Uganda, for example, the Mabamba swamp is a great Uganda birding safari destination that creates a possibility for 1 Day birding safari in Uganda especially for tourists that have less time. While here, you can view up to 260 bird species including the rare elusive shoebill while riding on a small boat; other attractions on Lake Victoria include; –

It has several islands that have unique wildlife as well as flora. For example, Ngamba islands are famous for its chimpanzees; Saa Nane islands have monkeys, clawless, otters, hyrax and rock rabbits. Other islands include; Lulamba island, Buyovu island, Damba island, Kone island, Livaji island, Mpungwe island among others.

Entebbe botanical gardens; are positioned in Entebbe and are suitable for Uganda bird watching safaris because they offer an excellent summary of some of the Ugandan birds such as the fish eagle, grey kestrel, yellow-throated leaflove, slender-billed weaver, red chested sunbird, great blue turaco, various shorebirds among others. These gardens are also a blend of the indigenous forest because horticulture is also done in this place giving it a very conducive environment.

The Uganda Wildlife Education Center; is an animal orphanage that was established as a sanctuary for animals that we’re unable to feed themselves in the wild. Gazetting them played a role in protecting the rare threatened animals. Residents in this Uganda Wildlife Education Center include; a few lions, some black rhinos, pythons, crocodiles, some few predators that are seldom seen in the wild among others.

Uganda Reptiles Village in Entebbe; was established to encourage people to respect reptiles other than killing them, for instance, the snakes, chameleons, monitor lizards, crocodiles among others.

Beaches along the shores of Lake Victoria; attract tourists especially those that are interested in doing leisure activities. Many leisure activities are organized on Lake Victoria especially sports activities like volleyball, football, boat cruising, swimming, is also possible however with caution due to bilharzia and malaria, and high jumping. There is always music for people to enjoy, restaurants in these places prepare fish for people to eat. Beaches along Lake Victoria include; Imperial Resort beach, Aero beach, Anderita beach, Ssese Gateway beach, among others.

Activities are done on Lake Victoria 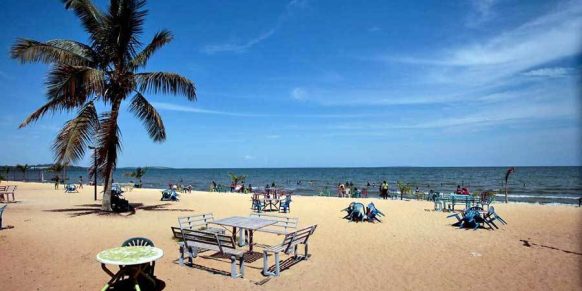 It is a water body, the most interesting activities are done on the water. These activities include;

Fishing safaris Uganda on Lake Victoria; where canoes and boats are prepared for this activity. Fishing is normally done with the guide of a fishing expert. Tourists are given hooks, to catch fish after which they prepare for them what they have caught. While fishing, one is also able to view some birds that are found along the lake shores.

Relax at the beaches along the shores; For example, at Imperial Resort beach, Aero beach, Anderita beach, Ssese Gateway beach, among others.

Cultural walks along the lake shores; enable you to watch birds, feel the cool breeze of the lake, listen to the sound of the lake waves, kick the fresh waters and run around in the sand. This makes you feel relaxed that’s why these beaches bring in so many people over the weekend.

There are numerous elegant places for people to rest in and around Lake Victoria at an affordable price, with nice rooms; some have a good view of the freshwater lake, hospitable and welcoming workers among others. Most of these accommodation areas are located in Entebbe for example; Lake Victoria Hotel, Lake Victoria Serena Golf Resort and Spa, Lake View Guest House, Protea hotel, Anderita Beach hotel, The Great Lakes Hotel, Acacia beach Hotel, Imperial Resort Beach Hotel, Airport View Hotel, Country lake Resort Hotel, Speke Resort Munyonyo to mention but a few.

The best time to visit Lake Victoria is all year through. The average temperature around Lake Victoria is between 19- 27 degrees celsius. It’s very cool through June- August, therefore, they are the most comfortable months to tour Lake Victoria. The semi-dry months are from January- February while the long rains happen in March-May and part of June. However, tourists, most enjoy the cool and dry months on Lake Victoria.