Uganda’s maiden flights to Nairobi, Juba and Mombasa have been set for tomorrow Tuesday 27th August ahead of the scheduled flight that was to take place on Wednesday 28th August as announced by the Ministry of works. The Uganda airlines maiden flight will set off tomorrow Tuesday 27th August at 10 am and it will be for selected people including; technical officers, government officials, and media to Nairobi, according to the Ministry of Works spokesperson Susan Kataike. This flight will last 55minutes. Has the maiden flight been changed?

The announcement for change was made by the ministry of Works, not the airline; via a tweet on Sunday and the sources indicate that the change in the launch date was made for marketing purposes that’s why it will only carry technical officers, government officials, and media to Nairobi.

However, Wednesday remains the day for the maiden commercial flight. The Airline will take off at 6:00 am and will reach Jomo Kenyatta International Airport (JKIA) at 7:15 am.

The Mogadishu flight will leave Entebbe at 5.37pm and land at Aden Adde International Airport at 8:00 pm.

Summary of the flight schedule

Planning to visit Uganda? Are you from a Kenya Safari? Tanzania safari? or any other Africa safari? It is now confirmed that the aircraft will fly and make transport for your safari in Uganda easy. The Uganda Airlines, therefore, is set to make it easy for travelers interested in Uganda safaris, Uganda tours, Uganda gorilla trekking safaris, wildlife safaris in Uganda, Uganda birding watching safaris, Uganda day tours, Uganda chimpanzee trekking tours and many more. 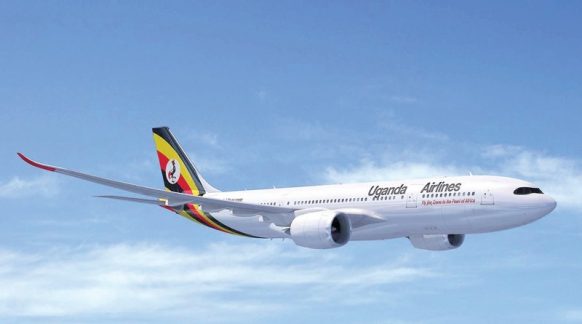 When and What Destinations Is The Uganda Airlines Going To Fly to?

It is confirmed that Uganda Airlines will fly to Nairobi, Juba, Dar es Salaam, Kilimanjaro, Mombasa, Bujumbura and Mogadishu. Uganda Airlines will fly to Nairobi and Juba twice daily and Mogadishu in Somalia three times a day. The aircraft is also expected to fly to Dar es Salam and Kilimanjaro once a day, Bujumbura and Mombasa three times a week.

Originally, Uganda Airlines had to make flights to 26 destinations according to a member of the Uganda Airlines task committee. The confirmed 19 regional and seven international routes are demand-driven. Regional routes will include Addis Ababa, Nairobi, Bujumbura, Kigali, Goma, Harare, Johannesburg, Dar es Salaam and Lagos among others. The International flights are to London, Amsterdam, Bombay, Dubai and Doha. These flights will not only connect business people but also those on holidays heading for Congo gorilla trekking safaris or Rwanda safaris dodging the long hours’ drive on dirt roads.

What is good with the Prices? These promotional costs of Uganda Airlines will run for two months and they are slightly lower than for other airlines. For instance, a flight to Nairobi at will cost $ 278 (1.022 million Shillings) which is much lower than both Rwanda Air and Kenya Airways, which cost up to $ 330 (about 1,213 million Shillings) and $ 350 (1,287 million Shillings) respectively. These lower costs of travelling to different destinations will enable the company to get enough travellers to use air transport than road transport while travelling within the East African region. The aircrafts available carry up to 72 passengers each with only 12 slots of the First class.

How do you book a Ticket?

Jennifer Bamuturaki Musiime, the Marketing and Public Relations Manager of the Airline Company said that the airline has also set up booking offices at the airport and several other locations.

Only a small percentage of Uganda’s largely youthful population truly remember the livery of Uganda Airlines but then here it returns. For the safari industry and those planning vacations across Africa and Uganda’s popular national parks like Queen Elizabeth National park and Bwindi Impenetrable National Park, this is a great achievement. It’s now going to be easier to tailor Rwanda wildlife safaris, Congo safaris, Uganda gorilla trekking safaris, Kenya Tours, Tanzania tours and to other African destinations.