Uganda is accessible from various points of the world and travellers interested in undertaking tours to Uganda can book the Uganda flights through a local agent in their home countries, through airlines directly, international ticket vendors most of which are on line or contact us – Prime Uganda safaris and tours Ltd for assistance.

It can be noted that Entebbe International Airport is connected to all dominant cities of the world for both cargo and passenger handling services. Uganda though with no operating national carrier at the moment is an accessible destination. A range of international carriers operate flights to Uganda through Entebbe International Airport from Canada, United States, France, Netherlands, Australia, Belgium, China, Dubai, South Africa, Germany, Kenya, Rwanda among others.

Perched on the shores of Lake Victoria, the Entebbe International Airport presents itself as the main gateway to Uganda and a center for out bound travel. At 40km from Kampala – the capital of Uganda, Entebbe peninsular itself has good accommodation provisions that make it self-reliant if one arrives late or doesn’t feel comfortable with further drive to Kampala. Entebbe International Airport is gaining an increasing ground in East Africa in handling both regional and international flights on a regular basis. 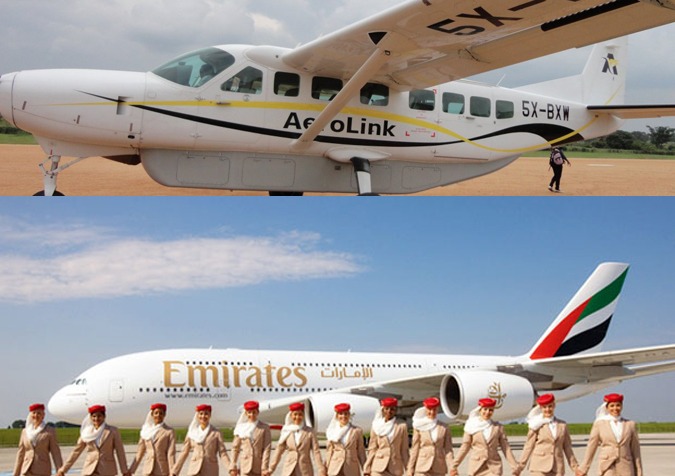 Uganda’s Entebbe International Airport also has specialized cargo flights to and from various points of the world. This is important for the visiting business travellers on a Uganda tour.

Additionally on Uganda flights, there are also domestic carriers that operate domestic flights and these include;

Aero Link Uganda which operates scheduled flights to up country Airstrips of Kisoro, Kihihi, Mweya, Kasese, Semliki, Pakuba, Bugungu and Apoka in Kidepo. It also operates charter flights to these destinations where the scheduled time table is not favoring.

Flights to Uganda; Further information you need to know while planning a Uganda tour

It can be noted that flights Europe and Entebbe is mainly linked by Amsterdam, London and Brussels. There are frequent flights along these routes. Though British Airways has announced the plans to quit route by October 3rd 2015, it is still I operation to the mentioned date offering five (5) flights per week connecting London Heathrow and Entebbe International Airport.

The KLM Royal Dutch Airlines happens to operate four (4) flights in a week between Amsterdam and Entebbe International Airport which after links to a range of Scandinavian countries including Denmark, Sweden and Norway.

The Brussels’s Airlines also operates four (4) flights a week connecting Uganda’s Entebbe International Airport and Brussels after which it links to other parts of Europe.

The Middle East and especially Dubai are noted to be the strong trading region for Uganda and is mostly served by Fly Emirates which operates daily flights between Dubai and Entebbe and then links to other cities of the world. The additional carriers on the route include; the Etihad Airways which connects to United Arab Emirates and Fly Dubai. Turkish Airlines also operate three flights between Entebbe and Istanbul per week and then linking to other cities in the Middle East and Europe.

Uganda is also connected to American larger cities through the hubs of the major Airlines. For example, the South African Airlines allows any Uganda tour undertaker to connect to Entebbe from Washington, Buenos Aires, Rio de Janerio not forgetting New York through Johannesburg.

The Egypt Air allows any traveller intending to do a tour in Uganda to connect to Entebbe in Uganda from Ney York and Montreal via Cairo while Fly Emirate connects travellers from San Francisco, Houston, Los Angeles, Toronto and New York via Dubai to Uganda’s Entebbe.

The travellers intending to do a tour in Uganda from the Far East can still access flights to Entebbe International Airport Uganda. The Kenya Airways operates flights to cities of Guangzhou, Mumbai, Bangkok and Hong Kong through Nairobi. The South African Airways connects to Sydney to Perth through Johannesburg.