Part of the culture in Uganda is Art & craft, people`s traditions are the lead source of inspiration for craft development. People`s feelings as they respond to various events of history, as well as their environments, influence Art & crafts spontaneously. Constant practice of artistic skills and knowledge creates beautiful Art and Craftworks and these are a source of employment in Uganda since traditional time.
Craftsmanship skills and inventiveness are a hereditary passed on from generation to generation. Uganda`s crafts basketry, blacksmith Ironworks, woodcarvings, backcloth, woven cloths and mats and stools just to mention but a few.
Uganda`s crafts portray immense ethnic background and setting, one can make a distinction between crafts made from different traditional societies but also similarities among various crafts from different Uganda`s ethnic groups. The unique traditional cultural practices in the various ethnic groups account for the differences seen on the different crafts.

Ethnologists allege that some crafts like the multi-headed spears are somehow connected to traditional rituals or ceremonies, or magical-religious practices. In the same line are the multi-mouthed pots that were commonly used to give the victims of the Kabaka’s (King`s) wrath poisoned beer. Among the Luo, Bagwele and the Basamya, the two mouthed pot is used in some rituals, like the birth of twins and initiating them. 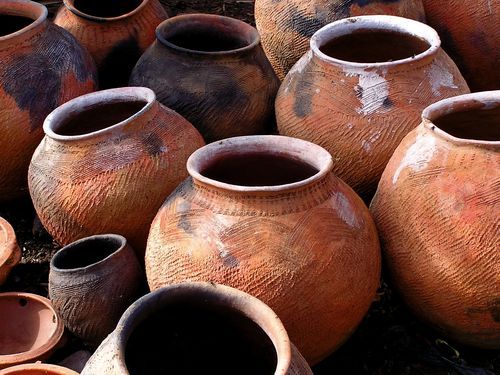 Ugandan crafts cultural and domestic can generally be categorised as; wood vessels plus gourd vessels used as food & drinks, smoking pipes potter, basketry, stools, miscellaneous household objects, clothing and adornments, animal skins and bark cloth, aprons and tails, hair dressing, girdles and belts, ear and neck ornaments, facial, neck, leg and arm ornaments, dancing accessories, hunting knives and bells, finger accessories such as wrist knives and rings, hunting gear, fighting wear such as shields, swords, spears, bows & arrows as well as sound instruments. Despite some of the differences that are common regarding their physical designs and functionality, crafts are bound together by a few qualities. In this regard, therefore, there is a need to analyse the various techniques used in the making of these craft-works by the different regions. For example, the large Teso field & storage baskets used are made from wicker but heavy materials when bound together. This type of baskets is very common in other regions such as Banyoro, Busoga, Acholi and the Hutu.

The local potters in the village build their pots of whatever description and function coming from the base upwards to the rim using the coiling method. In this way, the pottery method is the same in Alur, the Tooro, the Busoga, and Lango. In general, pottery is the work of a specialized craftsman. Among some ethnic groups such as the Langi, Bakiga, and the Bahuutu, however, the men make pots for their households. In most tribes, the potter is usually an insignificant member of society, while amongst the Baganda the royal potters who worked for the Kabaka had a special title for the potters, as well as special privileges like exemption from the lumuo tax and wore special aprons as their insignia. Among the Bavuma the industry entailed considerable teamwork between a number of people of both sexes; women can also make pots while men act as their middlemen and salesmen. In the case of Buganda, Bunyoro, and Busoga the potters were men and there were strong taboos against women going near the clay pits. For the Bavuma, Bagishu, Acholi and Madi, potters were women and in some other tribes, both men and women did pottery. Some of these included the Bakiga, Bahuutu, and Bairu. While the process of pot building is very similar in various tribes, there are still variations in the time taken drying and the firing method. 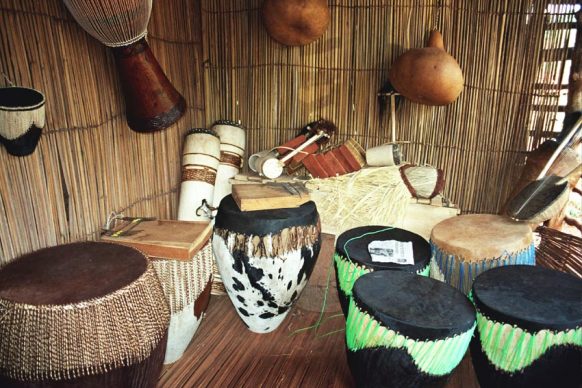 Generally making of musical instruments involves men, as well as the use and manipulation of musical instruments such as drums and fiddles, was strictly meant for men alone. However, due to external influences and the coming of schools such as single-sex schools with girls only today, all sorts of people participate fully in the playing of the musical instruments.
Basketry being a highly spread craft among Ugandan societies today is at the foundation of homemaking. Basketry is essential in constructing houses, stockades, fences as well as enclosures, poultry pens, making traps for wild animals, baskets and mats. Recently, diversification in basketry has been emphasized to produce modern items such as handbags, gift baskets ‘ hats, table mats, flat trays, wall hangings, ornament baskets and mats with different patterns. Most of these come from regions of Buganda, Toro, Kigezi and Bunyoro.

Similarly, barkcloth making and related crafts are likewise common among Bantu regions. With the use of the natalansis tree (omutuba), the process involves the use of a specially made heavy, groove mallet (ensaamu). In the process of the craftsman hitting the bark with the mallet, the fibrous bark becomes larger and thinner. Traditionally, the barkcloth was purposely made to be used as burial shrouds, beddings and clothing; and as carpets for the kings’ palaces’ floors, like in Buganda, Toro and Bunyoro the barkcloth was replaced by cotton and other clothing materials and items such as table mats, wallets, shoulder bags, handbags, briefcases, purses, woollen carpets, cushion covers and others have been made from bark cloth. 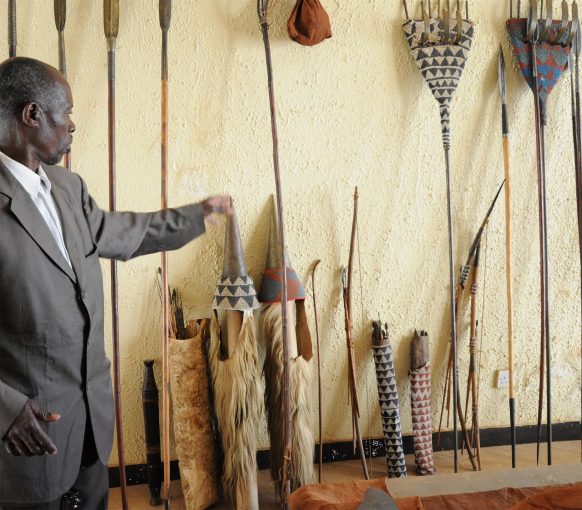 In addition within some cultures, the craftsmanship of metallic tools and other crafts by blacksmiths were also common. Blacksmiths made cutting tools, the majority of which included swords knifes the spears and arrows.
The Wood-curving sector is another one that thrived traditionally and still does today in Uganda. However, it has been very much affected by external forces and influences, like in terms of design.

Some of the commonest domestic woodcraft products include; stools tables, beds, mortars and pestles, wall hangings, tables, bowls, ladders, trays, boats and wooden canoes as well as others. Other carvings are also made in form of decorations such as masks, omweso boards, walking sticks musical instruments like small drums and others.
Traditional craft items of Ugandan culture include armlets, necklaces or earrings, arm and leg ornaments, bracelets, rings, and headgears. For instance, the Karimojong headgear is made out of human hair fitted together with grease and clay and strengthened with a wire framework around the front edge and is patterned red, blue and yellow coloured paints. Accompanied by metal eyelets across the crown and at the back edge that is used to hold and fasten ostrich features and other ornaments.

Generally, the act of witchcraft exists in all regions with objects varying according to the powers possessed by the user or witch doctor. Some include decorated leopard skins, animal blood, cow tails, animal horns, backcloth, rings, skins of snakes, features of rare birds, cowrie shells and beads.
Currently, there are clashes between different cultures. In Buganda for instance, there are immigrants from various parts of Uganda and beyond. Therefore there is a country-wide tendency of cultures influencing one another in regards to crafts and art. This, however, could lead to a strong political, social and economic integration in the sense that ethnocentrism could diehard at a fast-growing rate.
There has been an introduction of new materials and techniques. Plastic and aluminium products, for example, have to lead to the decline in usage of utilitarian local crafts like pottery. Most people in Uganda are resorting to the usage of plastic wares like jerrycans, mugs and bowls thus most Ugandan crafts becoming more of ornamental and souvenir like.

Thus Ugandan craftsmen have teamed up with a common goal and need: to sell their products and work. Previously when the markets were local, and life moved at a slow pace with no international buyers, there was no need to redesign the traditional crafts modernly. Today the production of craftworks by local craftsmen for sale is fairly progressing, is fast growing and has great potential. Major ideas behind this have been to preserve and encourage indigenous methods, to create jobs for the local people, especially women as well as youths, and to exploit the international huge market.