Also referred to as Alopochen aegyptiaca, the Egyptian Goose belong to Anatidae family and features great history dating far back in the ancient Egyptian times who featured it a lot in their artworks and would keep it at their homes. The Egyptian Goose is now among the exciting birds explored on Uganda birding safaris and tours.

The Egyptian Goose is a large bird stretching up to 71 – 73cm in length with a wing span of 135 – 155cm. It is strong bird species and has a lifespan of about 25 years.  The plumage of the chest, neck and head are buffy grey while the wings are mainly white as viewed while on safari in Uganda. The eye is surrounded by a dusky ring while the neck surrounds the neck. It has dark tail, brown-like scapulars, pink legs and bill along with brown eyes. 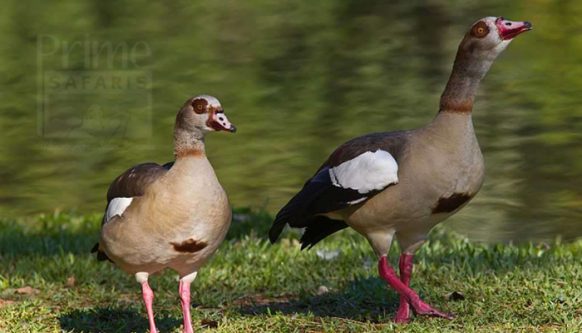 The identification of sexes can be done when the birds are singing and making calls. The Male features a croaky dark quack while the females feature a noisy and harsh quack. Such sounds enable spotting by birders on Uganda bird watching tours.

Egyptian goose transfers at night to breeding areas and spend much time feeding with their diet consisting of leaves, foliage, grains and insects such as worms and locusts. It forages by floating on water and at times diving its head into the water.

Regarding nesting, the Egyptian goose does not construct permanent nests and mostly utilize nests abandoned by other bird species and holes in old trees close to water bodies. At times, the Egyptian Goose can as well nest on ground and in trees.

Breeding among Egyptian Goose usually occurs at the onset of the rainy season and they are notably monogamous bird species making pair bonds forever. The breeding pair is very protective against the intruders and fighting might occur.

The Egyptian goose normally lays 5 – 11 eggs in high trees with the intention of preventing the hatched chicks from leaving the nest. Incubation takes 28 – 30 days by the female but caring and feeding is done by both parents.  Fledging occurs at 60 – 75 days following the hatch.

Regarding Conservation, the Egyptian Goose is listed as species of Least Concern on the red list of International Union for Conservation of Nature (IUCN).