Also referred to as Accipiter melanoleucus, the Great Sparrowhawk is noted to be the largest African member of genus Accipiter and is among the interesting bird species explored by birders on birding safaris in Uganda Africa.

The Great Sparrowhawk thrives majorly in forests and other non-desert areas especially where large trees exist for nesting.  In Uganda, the Great Sparrowhawk is commonly spotted in Bwindi Impenetrable National Park which is also a common destination for Uganda gorilla safaris and tours.

The plumage of Great Sparrowhawk is majorly black with a white throat, belly and chest. It has yellow eggs with large feet and talons as viewed on Uganda birding safari. 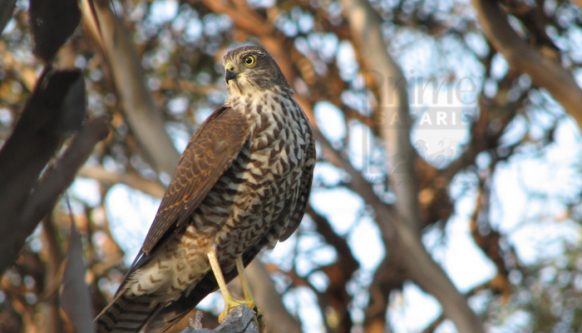 Great Sparrowhawk mainly preys on medium sized birds spotted from foliage-concealed perch and is then killed during flight. They at times chase prey in flight over tree canopy or open country. They can as well chase the prey on foot. Males can prey on doves while females consume majorly francolins and pigeons. On minor occasions, they supplement their diet with small mammals such as rodents, bats and juvenile mongooses. The Great Sparrowhawk have the capacity to carry their prey up to 12km above the tree canopy. This is at times viewed while on safari in Uganda.

Regarding nesting, the Great Sparrowhawk nests within the tree canopy about 7 – 36m high to protect the chicks from bad weather and predators. Occasionally, they nest on ground between huge tree trunks.  Both parents collect the many sticks to build the nest with a width of 50 – 70cm and 30 – 70cm in depth.

Black sparrowhawks are monogamous bird species and the pair mates throughout the breeding season from courtship up to the fledging period.  The hunting and food provision is done by male during this period.  A range of 2 – 4 eggs are laid and incubation lasts 34 – 38 days by female. The male takes over after bringing the prey allowing the female time to eat and at times bath in the closest stream. Fledging occurs between 37 – 50 days and parental care continues for the next 37 to 47 days.

Regarding conservation, the Great sparrowhawks are listed as species of Least Concern on the red list of International Union for Conservation of Nature (IUCN).