THE BAHA’I TEMPLE, THE FAITH’S MOTHER TEMPLE IN AFRICA

Home » THE BAHA’I TEMPLE, THE FAITH’S MOTHER TEMPLE IN AFRICA 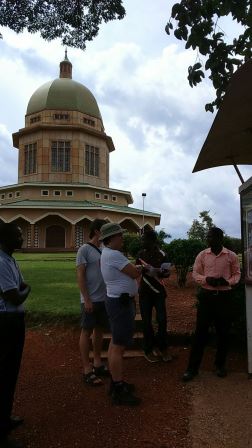 Positioned on the hill of Kikaya after branching off from Gayaza road, the Baha’i temple summit is the first of its stature in Africa and one of the iconic religious sites worth exploration on cultural safaris and tours in Uganda. This temple boasts of its spacious serene environment that includes a perfume of purity with a sense of peace on experiences while in this place.

The Bahai temple is a center of many amazing encounters with its rich history that goes way back in 1957 when it was setup and opened in 1961 officially. This amazing structure has stood quite a ray of time with less innovations and routine cleaning making it a historical Uganda tour attraction. The architectural design of this temple blends with the landscape. Just 2km off Gayaza road, it is on this spot that you get a clear 360 view of the Ntinda suburbs, distant Naguru hills with its attractive height as well as the Muyenga tank hills in the Far East.

Besides its beauty, the mother temple is the first of its kind in Africa with other similar temples in India, America, Germany, Australia, panama and Samoa and all these temples have a dome shaped though with a different architectural design. The dome of the Baha’i temple is made of mosaic tiles which were imported from Italy and Belgium and these were made in a good art, precision and skill which create an awesome picture.

The nine sided art piece at this temple is a representation of peace just because in the Arabic culture and tradition has value and letters that come from figure 9 form a word unity. The temple is also covered by nine doors and can host up to 800 people. The spacious and serene environment will passionately pull you to enter the house. The secret in this temple is that there is no altar and preaching that is done in that though as you enter the temple, there are shelves filled with books that contain information and quotations about this faith. However photography in the temple is prohibited despite the admiration – something that should be observed while on Africa vacation holiday safari tour in Uganda.

The temple is surrounded by an expansive compound that is embedded with breathtaking trees and this draws a serene appearance that harmonizes with the spiritual world of this place. This green cover is maintained by a tireless team that keeps the place spotless. The cemetery at the temple is yet another harmonizing place with a neat organisation of the tombs as one of the tombs is made in an African map shape.

The temple is open to visitor from all walks of life as the Baha’i faith emphasizes spiritual unity of all human kind.             Thus for all the world travelers interested in exploring religious sites should not leave out Bahai Temple while planning safaris and tours to Uganda.