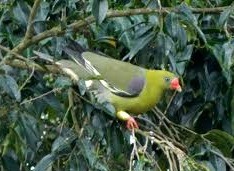 Bird watching is fascinating activity which is very much rewarding to birders especially when they book their bird watching safaris to Uganda which is gifted with diverse bird species including even the world’s endangered species which cannot be seen anywhere else apart from Uganda the pearl of Africa. Uganda is the only country where one can visit and watch over 500 individual bird species in one bird watching destination. Most of Uganda’s bird species can be easily watched in the national parks and Kibale forest national park is one of the best places where one can enjoy bird watching without any disturbance.
Kibale national park is a birding destination in Uganda and the park boast of an estimated number of more than 375 Bird species which can be watched in the various parts of the park. Bird watching tours in the park mainly starts at 7am at Kanyanchu which is located in the centre of the park but visitors interested in bird watching are requested to book in advance. The experience got by visitors who participates in this bird watching is fantastic and interesting and above all stays in the mind of the bird watchers for the rest of his or her life time on earth.
The rare species of birds which visitors on bird watching safaris in Uganda can view in the park include the Papyrus Gonolek that can be easily found in the wetlands of the park, White-winged Warbler as well as the White-collared Olive back and Papyrus Canary .Watching these comes with maximum entertainment from the real melodies and sounds of the bird species in the early morning and in the evenings when the atmosphere is calm and the skies very clear.
One of the recommendable bird watching areas in the park include the Bigodi Wetland Sanctuary which is situated just small distance outside the park, .The wetland is home to roughly 138 bird species and these can be easily seen by the visitors participating in guided walks along the trails developed in the wetland and also other visitors can use the viewing plat forms set in the broad walking trails to enjoy the sights and sounds of the various bird species found this area. The various bird species which bird lovers can have chance to enjoy their sounds and watch their bright shining colours include the White-spotted Fluff tail, Brown-backed Scrub-robin ,Yellow-spotted Barbet, Black Bishop as well as Hairy-breasted Barbet, Yellow-billed Barbet plus the rare White-breasted Negrofinch , unique Western Nicator, Grey-winged Robin-chat, White-tailed Ant-thrush, Black-and-white Shrike-flycatcher, Brown-crowned Tchagra, Brown-throated Wattle-eye, Superb Sunbird, Black-crowned Waxbill, Bocage’s and Bush-shrike among other interesting bird species.
Uganda Safaris /Uganda Safari News
Prime Uganda Safaris and Tours Ltd