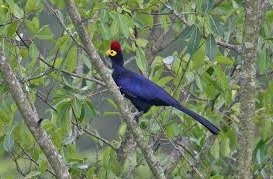 The great blue turaco scientifically referred to as Corythaeola cristata is one of the amazing bird species that are explored on birding safaris in Uganda. The great blue turaco is notably the largest turaco and the largest species in the order of Cuculiformes which is diverse stretching to include Cuckoos.
The great blue turaco features a turquoise-blue head with a bluish-black crest at the fore crown and the crown. The bright appearing yellow bill with red tip is visibly large and curved as viewed on safari in Uganda. The reddish brown eyes are surrounded by plain dark turquoise-blue eye-rings. The throat, cheeks and the chin of the great blue turaco feature gray coloring while the turquoise blue color mark the turaco’s upper section which include the tail and the wings. The great turaco features a black wide band close to its wide long tail. The legs of the great blue turaco along with its feet feature black color. Interestingly to note is that both sexes of the great blue turaco are the same.
The Great Blue Turaco is noted to be  the largest species in the family Musophagidae and is basically 70-76 cm in their length and weigh 0.8-1.2 kg while the males are somehow smaller as viewed on birding Uganda safaris.
The great blue turaco marks their territories all the year-round and just like other Turacos, the great blue turacos feature a shy character and would hardly perch on the ground except while going to bath or drink. They are noted to be pretty nimble as they climb through the branches of trees. They are always in groups such as pairs, in family or social groups that stretch up to 7 members with a range of groups converging one large fruit tree.
It can be noted that Turacos are not better fliers and as a result they tend to fly short distances rising to lower forest levels. Their courtship is marked by calling, the chasing and feeding each other along with raising the crest and their long tail. They conduct their reproduction by joining hands in building a stick nest on a tall tree where the female lays two eggs with pale blue color and the incubation is conducted by both parents for a period of 31 days and the chicks are cared for both parents and at times the extra helper. The chicks of great blue turaco get out of the nests at 6 weeks period but are kept under the care of parents until they are 3 months old.
Regarding the diet, the great blue turaco consumes fruits, flowers, leaves, buds, insects . They spend much of the day foraging except in the hottest day time and are greatly active in the evening as explored on tours in Uganda.
The great blue turaco communicate in a vocal call with a deep glutteral sound that alternates along with the softer trill. The vocalizations of the great blue turaco are commonly heard at the sun set and at the sun rise and form a significant section of their displays in courtship.
Regarding the habitat and range, the great blue turaco are greatly distributed compared to other turacos and greatly thrive in canopies, secondary growth trees, forests and the forest patches in the montane, humid and the savannah areas. They are listed as least concern on the red list of the international Union for Conservation of Nature.