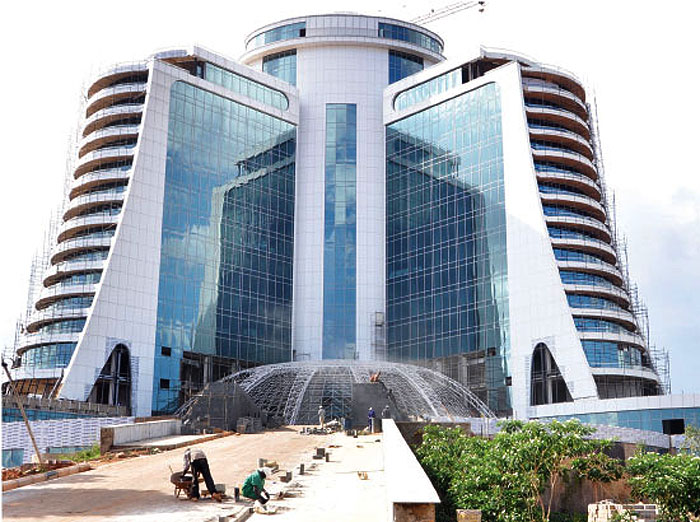 The Hilton Hotel Kampala positioned on Nakasero Hill with all round views of Kampala city stands as one of the largest accommodation establishments in Kampala that have the potential of providing a considerable overnight stay for the range of travelers on safaris in Uganda.
Despite the numerous construction delays in the finishing of Hilton Hotel which was started with the aim of accommodating the dignitaries during the 2007 Commonwealth Heads of Government Meeting, the hotel has eventually come to accomplishment and the officials believe that it will open in December generating a minimum of 2,000 jobs and present additional up class accommodation to the Uganda safari undertakers.
The Aya group boss Mohamed Hamid has confirmed the official opening of Hilton Hotel in the month of December 2015. The proprietors believe that the hotel will enhance the hospitality image of Uganda which would in turn attract more travelers to plan safaris to Uganda.
Uganda still features low bed count and limited upscale accommodation units which partly affects her tourism and hospitality sector. Now, with the opening of such International chains of hotels like Hilton, Uganda is on the move to better her industry standards. The limited accommodation facilities results into increased accommodation tariffs that have always put the image of Uganda as an expensive destination which in turn affects the bed occupancy rate.
Hilton Hotel will stand as a fine luxury 5 star hotel in Kampala featuring a palm lined road leading to a domed five storey atrium along with 22 sculpted storey tower. Hilton Hotel features 272 luxury suites and the guestrooms presenting a range of facilities including three (3) restaurants, two (2) entertainment bars, an extensive health and beauty spa along with meeting and conference facilities taking over 1,000 delegates not forgetting the ballrooms for the private functions which will be open to all intending visitors including those on Uganda safaris.
The Hilton Hotel features a floor area of over 32,000m² and 23 floors. Uganda will come second to Kenya to possess the Hilton brand in the East and Central of Africa. Hilton Hotels & Resorts feature a range of over 550 hotels and resorts in over 80 countries in six (6) continents. Therefore, its opening in Kampala brings a lot of expertise and popularity not only for Kampala but for Uganda in general which will in turn increase the safaris and tours to Uganda