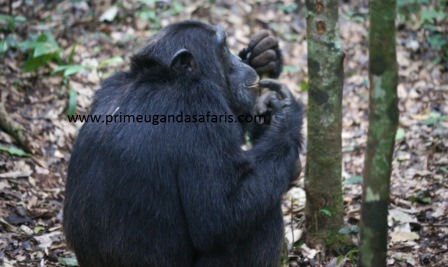 Kibale National Park in the west of Uganda is known as the primate capital of the world considering the population of primates that are found in it. A range of thirteen (13) primate species exist within the park including the common chimpanzee which for the ground for chimpanzees trekking safaris in Uganda.
Chimpanzee trekking is the prime activity in Kibale National Park with t commencing at 8am and 2pm daily with an estimated duration of 2 – 5 hours. The Uganda safari undertakers interested in this activity are required to buy chimpanzee permits which are priced at $150 per permit. The permits are under the sole supply of Uganda Wildlife Authority which can be issued at Uganda Wildlife Headquarters along Kiira Road in Kampala and at Ishunga Center in Kibale National Park.
Chimpanzee trekking experience is far beyond only chimpanzees. The prehistoric forest of Kibale is gifted with lush flora some of which are central to the traditions of the surrounding communities, the counts of birds are enormous their enchanting noise make the trek memorable. The landscape its self where you hike through the forest will raised slopes and simple valleys preset an ideal encounter with nature and its beauty. The combination of this makes the chimpanzee trekking encounter worth undertaking while on Uganda safaris and tours.
Encountering the chimpanzees as they roll themselves on tree branches, make pant hooting calls, socialize, mate and the young ones expressing their playful skills make the one (1) hour direct encounter with chimps memorable. The opportunity is availed to you take as great cunts if pictures as possible.
Chimpanzees are known as one of the four great Ape composition along with orangutans, bonobos and gorillas and the wild chimpanzees are known be thriving only in Africa. They amazingly share 95 to 98% of the human DNA and this makes them closer to humans than gorillas which are also encountered on gorilla trekking safaris in Uganda. The chimpanzees have been noted to make use of tools more than any other creature apart from the humans.

In terms of longevity, Chimpanzees are known to live up to 50 years in the wild and 60 years in captivity. They do hunting of the small mammals including monkeys. They greatly feed on fruit, seeds, nuts, leaves, blossoms and a range of insects. As a result of their diverse eating habits, chimpanzees have managed to spread to a range of habitats compared to Gorillas and Orangutans. This can be seen in Uganda. The Chimpanzees are spread to a wider coverage including Bwindi, Kibale, Kyambura Kalinzu, Semliki and Budongo compared to gorillas that only thrive in Mgahinga Gorilla and Bwindi National Parks as always encountered on a safari in Uganda.
It is estimated that there are 172,000 and 300,000 counts of Chimpanzees thriving in the wild and these are spread in the 21countries most of which are in the Central Africa including Uganda in a rain forest equatorial belt. Unfortunately, these habitats are increasingly being destroyed which threatens the existence of these Species one of the reason they are listed as endangered on the International Union for Conservation of Nature Red list.
Therefore, undertaking a chimpanzee trekking encounter in Kibale National Park is one of those maiden encounters that will generate lifetime memories.
Uganda safaris/Uganda safari News
Prime Uganda safaris & Tours Ltd