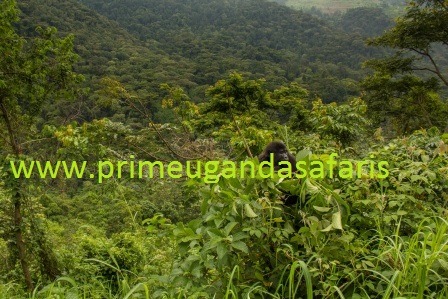 The mountain gorillas of Bwindi Impenetrable National Park are part of the remaining population of the great Ape Species that thrive only in the jungles of the tropical Africa and in particular the forested hilly landscapes of Rwanda, Congo and Uganda where they are always encountered on gorilla trekking safaris in Uganda.
Scientifically referred to as Gorilla Berengei berengei in commemoration of the German Big game hunter Oscar Von Berenge, the mountain gorillas are recorded to be the most powerful apes in the world today. With over 880 mountain gorilla populations known to be thriving in the world today with none known to be living in captivity, the conservation of their numbers is thus significant. The conservation of mountain gorillas attained an international publicity with the intervention of Dian Fossey who carried out substantive research about them and advocated for their conservation until her demise in 1985.
The emergence of gorilla tourism including gorilla safaris in Uganda though the pioneer gorilla conservationists were not in line with it, it presented its self as a sustainable option that would work towards the conservation of mountain gorillas while serving the interest of the state and the local communities surrounding gorilla habitats.
In Bwindi Impenetrable National Park, mountain gorillas were habituated following the initialization of the gorilla tourism concept in 1993, the Mubare gorilla family in Buhoma was formally opened up for tracking. This marked the beginning of Uganda gorilla safaris. Subsequently, a range of gorilla groups were habituated and in return twelve (12) gorilla families have been introduced to the gorilla trekkers for encountering while on a gorilla trekking safari in Uganda. These gorilla families are distributed in four regions namely Nkuringo, Ruhija, Buhoma and Rushaga.
Bwindi as of now boasts of the greatest mountain gorilla populations in the whole area and the count is steadily increasing something that can be attributed to the increased conservation efforts by the Uganda Wildlife Authority, local community and the International organizations.
Uganda gorilla safaris/Uganda gorilla safari News
Prime Uganda safaris & Tours Ltd