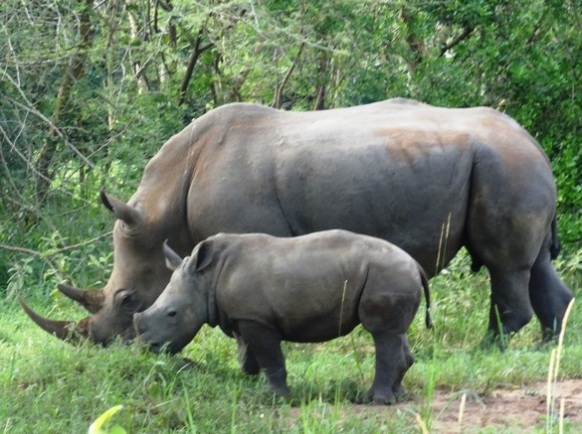 Uganda is credited to have launched the ten (10) year National Rhino Strategy. The Uganda’s Minister for Tourism Wildlife and Antiquities launched the strategic plan in the country’s capital Kampala at the onset of the three (3) days deliberation that was conducted at Kampala Sheraton Hotel with attendance of counts of industry participants both local and international.
It can be noted that at the turn of the 20th century, the western explorers ventured into safaris to Africa including Uganda safaris captivated by rolling wilderness landscapes and savannah plains. A number of them including the Britain’s Prime Minister Winston Churchill and Theodore Roosevelt the American President and a naturalist traveled to Uganda. During such times, exploration was coupled with big game hunting and shooting of wildlife was a common phenomenon. In fact on the cover of his book African Journeys, Churchill poses with a dead Rhino in the Uganda safari destination of Ajai Wildlife Reserve.
With such occurrence, the population of rhinos got threatened and in 1924 an article was run in the bulletin of Zoological Society of New York drawing attention to the likely danger of northern white Rhino extinction and it is from this that the efforts to conserve the Rhinos emerged from. In 1951, the populations had increased steadily. For example in west Nile the populations had increased to 300 by 1951 and in 1955, they had increased to 1955.
However due to unstable political climate in 1970s and 1980s, the poachers took advantage of the situation and hunted Rhinos to extinction. In 1982, the last white Rhino was observed in Murchison Falls National Park while the year that followed the last eastern black Rhino was observed in Kidepo Valley National Park.
With the inception of a stable government in 1980s, peace has not only reigned on people alone but wildlife too. Legal structures were put in place, wildlife act enacted, more protected areas gazetted and new conservation approaches explored enabling wildlife regeneration to occur. The interest of restoring those that had faced extinction gained ground as the international community had gained hopes for the continuity of wildlife in Uganda.
The Rhino Fund Uganda in the month of May 1997 under the guidance of Ray and Dr. Eve drafted the structure and put together efforts that saw the Rhinos arrive in 2005 and settle at their current home Ziwa Rhino Sanctuary which has become a popular attraction for travelers on safaris in Uganda.
Other efforts have since followed especially strategic management plans to ensure that conservation is in line with the international and regional best practices and these include the Crested Crane Action Plan and Shoe bill Action Plan. Therefore, developing the Rhino strategic plan is considered timely and seen as positive step to ensure their continuity.
The UWA chief Dr. Andrew Seguya noted that Uganda is a rhino range state and thus a member of the East Africa Rhino Management Group (ERMG) along with African Rhino Specialist Group (AfRSG). Thus Uganda aims at establishing a rightful position where she can apply conservation according to the ideals of the respective groups.
The National Rhino Strategy is drawn with guidance from 2014 Uganda Wildlife Policy and the Uganda Wildlife Act Cap 200 of 2000 which gives the Executive Director the mandate to draft the strategic plans guiding the authority to the realization of its objectives.
The strategy features security, Habitat loss and modification, poaching, geo politics, international markets diseases along with other health challenges, human-wildlife conflict, inbreeding depression, infrastructure, oil not forgetting tourism development.
It is noted that in the future, Rhinos will be re-introduced to their original habitats where they can breed and multiply and continue to be encountered on Uganda safari.