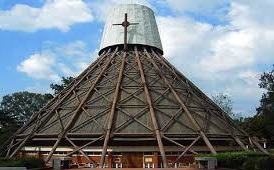 Uganda Martyrs Shrine Namugongo is one of the best religious and cultural sites in Uganda drawing many travelers from Africa and all over the world to undertake safaris to Uganda especially on 3rd of June every year. The shrine is the place where a total of 32 young Ugandan Christian coverts were martyred on denial to condemn the new religion by then (Christianity) which was out spreading at fast rate in Uganda the pearl of Africa. This annoyed the Kabaka of Buganda by then King (Kabaka Mwanga II,) and he decided to order his loyalties to execute or murder the 32 young men who refused to denounce their religion.
The Shrine is famous for its splendid as well as unique interior and exterior shape which is eye-catching to various travelers on Uganda safaris especially those that have spared time to visit the site. The shrine is also notable for its shape and architectural plan which is unique and only found in the site in the whole of Uganda.
Taking Uganda safari to Namugongo Shrine will enable you to view the 22 copper pillars-standing over the one hundred feet long that support the shrine. Your Uganda safari will also allow you enjoy the sights of the shrine which is constructed in way that looks like an African hut. The wooden doors venerate the shrine truly express the history of the Martyrs.
The Shrine is decorated with 1000 seats which can be used by travelers on their Uganda safari tour to Namugongo Martyrs shrine.
The construction process of the famous Uganda Martyrs’ Shrine was started in the year 1967 and it was completed in the year 1975.The shrine which attracts many people to undertake safaris to Uganda was officially opened by the special Papal envoy, His Eminence Sergio Cardinal Pignedoli on the date of 3rd June 1975.
Pope John Paul II’s six days safari tour to Uganda’s Namugongo on the month of February 7, 1993, it helped to raise the status of the Shrine to level of a minor Basilica.
The big spectacular Shrine covering Namugongo today stands perfectly on the point where the ancient small parish church used to be. It is the very place where Charles Lwanga one of the Martyrs was burnt alive.
The unique lake found in the garden Centre of Namugong is another unique feature which visitors on Uganda safaris should not miss to explore .The Lake is depiction in memory of the work done by St. Charles Lwanga while still on good terms with the King Mwanga’s palace. Various pilgrims while on the safari tour to Uganda’s Namugongo have often fetched water from this historic lake and some of them have  come to testify that the water in the lake heals different diseases.
Uganda Safaris/Uganda Safari News
Prime Uganda Safaris and Tours Ltd